This is a post from several years ago. It’s a bit long, but I hope you can find the time to read about this fiasco. I changed the names, but everything else is absolutely true. 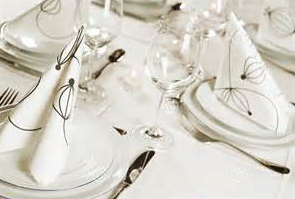 “This was a good idea of yours, George,” Carmen said. “After two weeks of camp food, I think we’re all ready for a gourmet meal.” The six friends who congregated in the entrance of the small town’s only hotel restaurant, nodded in agreement.

George craned his neck to look into the dining room. “No hostess. I guess we just go ahead.” He rushed in to claim the only available table.

Carmen looked around for a waitress. Still no one in sight to say, “Hang on a minute and we’ll clean the table for you first,” so the campers settled into their places and stared at the mess left behind by the previous diners. Bits of mashed potato and blobs of ketchup, the pepper shaker lying on its side, and leftover cutlery littered the table.

“How’re y’all doin’?” The waitress—Jackie, according to her name tag—was a friendly young woman wearing a uniform one size too small. She shoved the remaining cutlery to the center of the table and attacked the food dribbles with a stained, sour-smelling cloth. She wiped the table, leaving behind little beads of gray dishrag juice. Before it was dry she slid a water glass in front of each of them, rim side down.

Carmen glanced at her husband, Bill, and muttered, “No water for me today.”

Jackie reset the table using the cutlery from the heap in the center. No place mats. Carmen surreptitiously pushed the used pieces aside while the waitress finished the settings across from her. She noticed that Bill, George, and Millie did the same. “Could we please have new forks and knives?”

“Hnnf! Sure! No sweat.” She shrugged and turned to get more cutlery from a side counter.

“Anybody feel like a glass of wine?” George asked.

Jackie brought a tray of wineglasses already filled. Again, the six friends exchanged looks. Whatever happened to pouring the wine at the table?  Carmen sighed and wiped the rim of her glass with a napkin. The others followed her lead.

The glasses were filled to within a half inch of the top. No way you could swirl the wine or toast with your neighbour without spilling.

“I filled yer glasses right up.” The waitress beamed. Apparently wine etiquette was all about quantity. Quality was not a consideration.

Jackie took out her writing pad. All but Carmen ordered steaks and were asked if they wanted gravy with their mashed potato.

“White or brown what?

Five sets of eyes rolled as they answered “brown.” Carmen imagined the cook reaching for food colouring according to the order.

After Carmen ordered her chicken parmigiana with pasta, Jackie smiled and said, “Y’all help yerself to the salad bar.”

Carmen looked around. “Bill? Do you see any plates?”

“Must be those bowls at the end of the counter.”

“I thought those were cereal bowls,” she said, “…for children.” Dish in hand, she looked over the choices in the salad bar. The huge bowl holding the main ingredient, pale iceberg lettuce, was nearly empty. Dribs and drabs of sliced mushrooms, beans, pickled beet, and other additions meant to liven up the plate, were almost gone, but the six friends managed to scrape together a tired-looking salad.

Hunger took over and the campers cleaned their plates.

“You guys were sure hungry, eh?” Jackie said. “Don’t worry. I’ll have yer orders up in a jiff.” She layered the empty salad bowls up the length of her arm, apparently oblivious to the blob of mayo that smeared yet another stain on her bespattered white blouse.

Carmen looked forlornly at her dinner. She touched the edge of her well-worn, glass plate. Ice cold. Maybe she should have had the steak too? The spaghetti was cold. She put her finger into the middle where the white chicken breast lay on the white pasta. Lukewarm. She eyed the splash of colour on the side of her plate with dismay—the contents of a can of tomato paste—and one spoonful confirmed that it, too, was only heated to lukewarm. She had opened enough cans of the stuff in making spaghetti sauce to know how it looked and tasted. But pure tomato paste as a sauce? Nothing added, nothing taken away.

“Gross!” she muttered. Bill gave her a sympathetic glance.

A piece of white Wonder bread toasted on one side and slathered in margarine—she knew that smell—teetered on the edge of the plate. “Now I know why they call it Wonder bread. You wonder how anyone can eat it.”

“I should have had steak like you fellows did,” Carmen said to the group.

“You didn’t miss a thing,” George said. “My jaw is tired from trying to chew that flavourless piece of rawhide.”

Jackie had disappeared. Under the circumstances, Carmen thought she would have done the same.

No offers of tea or coffee. No question of dessert. Only the bill already tallied, slapped onto the table. “Y’all have a nice evenin’ now.”

Leaving the hotel, Carmen said, “Ice cream and brandy at our place?”