Think RED. Now imagine this full moon as red as the ring around it. That’s how it really looked. The smoke in the air gave the moon the colour of blood. I’m sorry my camera doesn’t show how red it was.

I thought it was interesting that the end of a tree branch is silhouetted against the moon’s face.

The next day, as Paul Simon said …

It was a sunny day,

Not a cloud was in the sky.

Not a negative word was heard,

From the people passing by.

Not clouds made of water anyway. It would have been a bluebird sky if it wasn’t for the smoke. The sun was so red last evening that I thought I was looking at the red planet in a science fiction movie. It was eeeeeeeerie! Again, the photo doesn’t show the true colour I saw. Like the moon the night before, the sun was blood red. Today it’s more of the same. Smoke fills the skies.

We have natural disasters all over the world. Wildfires, floods, and hurricanes. These are all extremely hard to deal with. What I don’t understand is why we need to add man-made disasters (terrorism, political power struggles, crime, and war) to the mix. 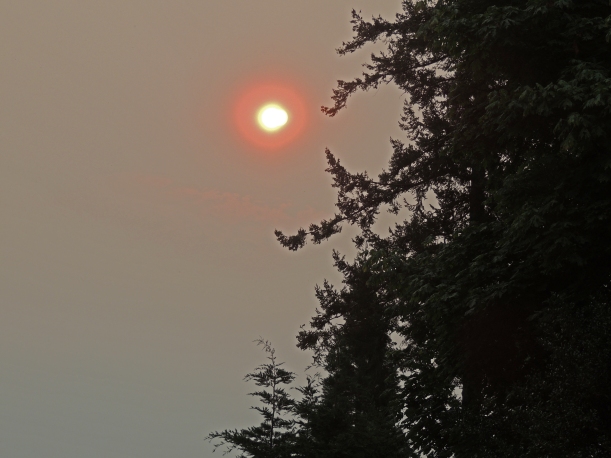 I just had a note from WordPress letting me know this was my 500th post. My first reaction was, “Wow! Isn’t that great?” but then I thought, “Uh-oh! Am I talking too much?” 😉