This is a revamping of a post from nearly five years ago. Apologies to my longtime followers who were with me then.

In 1977, after a hot summer in Greece, the Captain and I welcomed the cooler weather of September. The wind came up and we didn’t mind that so much. 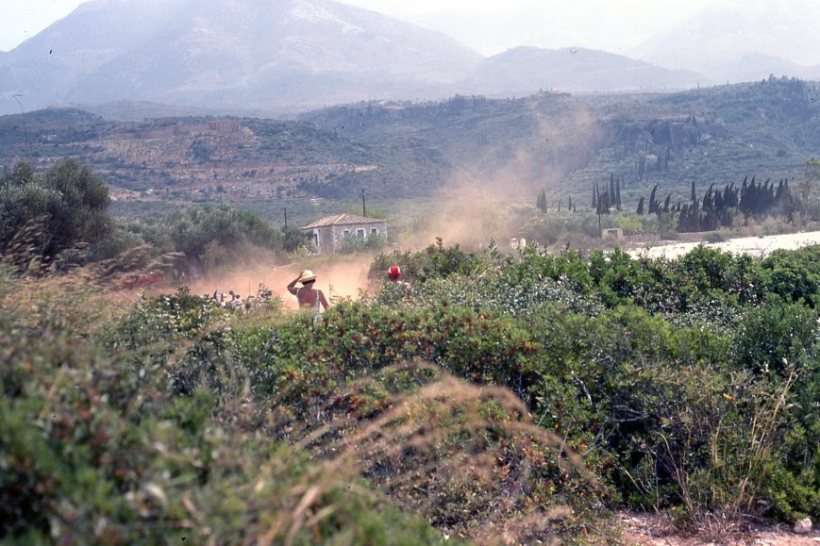 But it got cooler and swimming in the ocean was a chillier event. The tourists were leaving. Maybe it was time for us to think about hitting the road too.

We drove northeast taking a side trip to Epidaurus to see the great amphitheater there. Click here to see the post on Epidaurus.

At Corinth, northern Greece and the Peloponnese were once joined by a narrow strip of land. Now several bridges span the Corinth Canal connecting the north and south of Greece. On the highway heading towards Athens, we stopped on the northern side of one of these bridges to take a picture of the famous canal. Completed in 1893, it is about four miles long and 70 feet wide at the base. After all the effort to build it, the canal is still only good for small boat traffic. The sheer limestone cliffs have constant landslides, and canal closures for repairs are frequent. Also, the depth and width of the waterway allow only boats with a maximum width of 58 ft. and a draft of 24 ft. That disqualifies most modern freighters. Even allowing for the narrowness and shallowness of the waterway, boats that just barely qualify don’t like to risk it because of the high winds that funnel between the walls, and the tides that rush through the canal between the Adriatic and the Aegean seas.

We are looking eastward into the Saronic Gulf, near the southwest of the Aegian Sea.

Since we wanted to stop to take a photo, it was a good time to pull in to the little coffee shop on the north side of the bridge. The place looked neglected and didn’t appear to see many customers in spite of the perfect location, but we didn’t care. We were tired and needed a break from driving. A cup of coffee would hit the spot.

I didn’t expect to find American style coffee, but I would even have welcomed a cup of Greek espresso  with the sweet fine coffee grounds settled in the bottom of those tiny cups. But nothing so fancy was to be had. Our coffee came in plastic cups filled with hottish water and a little packet of Nescafe instant coffee on the side. Sugar was available (which I don’t take because I’m sweet enough), but no milk or cream. Our extreme disappointment made this java stop memorable even after 40 years. How many cups of coffee do you remember years later?

Later, outside the coffee shop, we tried to get a better look at the canal close up. I walked as close as I dared to the edge of the canal and then realized that there was no barricade or fence or sign of any kind, warning of the 80 degree (nearly vertical) 300-foot drop. The dirt parking lot and area around the coffee shop were quite drivable and anyone could have taken a wrong turn from the parking lot at night and gone over the edge. Dogs or children running around could easily go over.

I see in some modern photos that there are short bits of fence, but it doesn’t seem that access to the edge of the canal is restricted even now. I still shudder to think of it.

If anyone knows of stricter fencing of the area next to the canal all these years later, I would be most happy to hear about it.