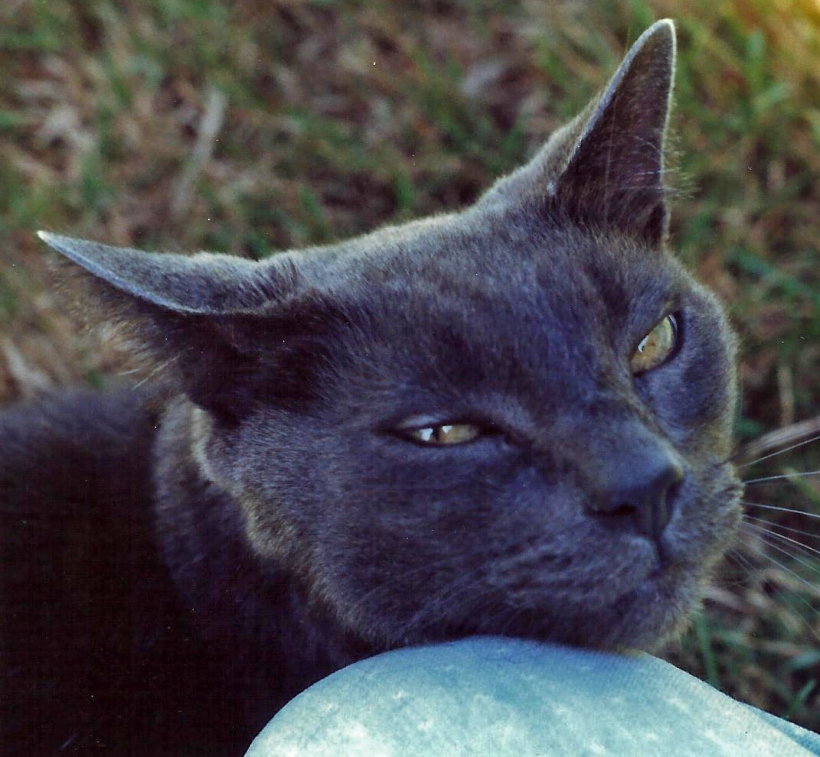 Cowboy and Shorty were partners in crime. Cowboy was a sleek, smoky gray cat with ears that seemed a bit large for his smallish head. His brother, Shorty, was a perfectly made Siamese. Well, almost perfect. Sometimes when the sunlight shone on his tail, faint rings told of a certain amount of alley cat ancestry.

The brothers loved each other very much. They wrestled, snuggled up to sleep, and sometimes, they got into mischief together.

It’s hard to say which of them was smarter, but invariably, when the two of them did something they shouldn’t, it was Shorty who got caught.  It was like that the time they decided to check out the kitchen garbage can after I went to bed.

The kitchen garbage can was kept in a cupboard under the sink. It was easy for a smart cat to get into. All Cowboy had to do was to hook his paw under the door and pull. Then quick as a wink he would stick his head in the open space and squeeze through. I’d seen him do this often enough.

Here’s what I think happened:

The lights have just been turned out. The people are in bed.

A lovely aroma of chicken scraps greets Cowboy as he peers over the rim of the garbage can. Up on his hind legs, he spies a half-eaten chicken drumstick. So much meat left on it. Pieces of skin not eaten. He’s drooling in anticipation of the wonderful snack, when a Siamese paw reaches past him and scoops that drumstick right from under his nose.

“Meeeooow!  Shorty!  Give that back,” he spits.

He hears a pair of people feet land on the floor in the bedroom. The shuffling of slippers comes closer.

“Yikes!” Shorty thinks, “I’m getting out of here,” and he slips out of the cupboard and sits on the floor as prettily as he can, eyes looking towards heaven.

“You don’t fool me, Shorty!” Anneli says, shaking her finger at him.  “I know you were in that garbage can again.  Weren’t you?  Bad cat!  Don’t you do that again!  Bad Shorty!”

“I wonder how much mess he made,” she grumbles.

She opens the cupboard. There sits Cowboy, licking his paws and washing his face.  All that’s left of the “snack” is a tiny piece of chewed up drumstick bone.