About 100 miles east of Vancouver, BC, lies the town of Hope. From here the highway winds through a beautiful stretch of hilly country for 82 miles to the town of Princeton.

Just about 10 miles east of Hope is a viewpoint where I took some photos of the second largest landslide in Canadian history. The Hope Slide came down the mountain on January 9, 1965, burying several vehicles and killing four people. The bodies of two were retrieved, but two others remain buried beneath tons of rock. I quote Wikipedia here: The slide completely displaced the water and mud in Outram Lake below with incredible force, throwing it against the opposite side of the valley, wiping all vegetation and trees down to the bare rock, then splashed back up the original, now bare, slope before settling.

I see no indication of an Outram Lake on modern maps, but there is an Outram Mountain nearby. About a mile and a half of the highway was covered in rock, so a gravel road was constructed as a detour until a new section of highway could be built. A portion of the old highway still lies under the slide. 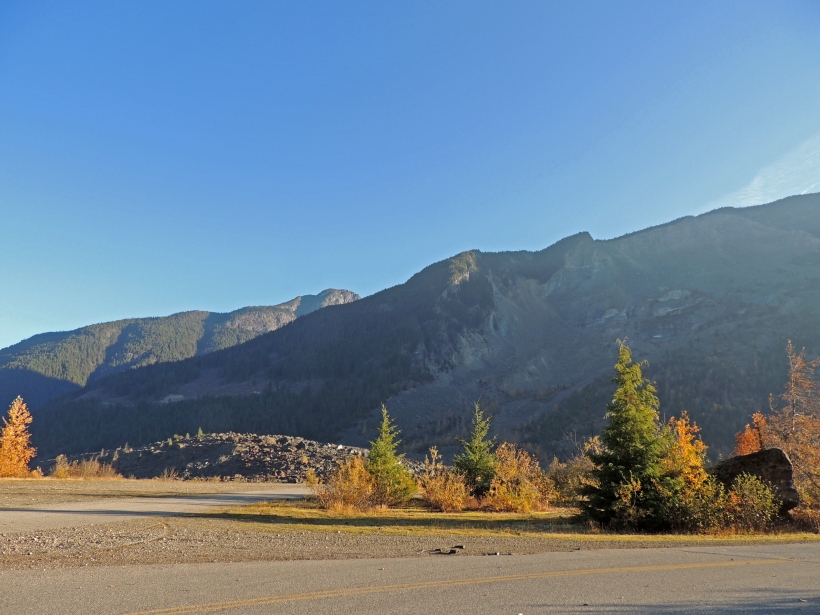 One sweet thing about this whole sad story is that beside the viewpoint, masses of wild strawberries are growing in the moss that covers the gritty gravel beside the road. 31 thoughts on “The Hope Slide”