After 27 years, the taps and faucet in our bathroom sink needed to be replaced. Not only was the calcium residue winning the battle I waged with it all those years, but the material in the collar around the base of the taps was breaking down. It was time for a change.

The Captain bought a new faucet and taps and set to work. Ruby was very interested in what was happening to the sink, but Emma, at the bottom of the photo, was not at all sure where that gray monster as big as herself, had come from or what it was doing there. She kept well away from it.  Who knew what it could do, especially with those metal feelers reaching out towards her?

She tried barking at it, but it stayed there, apparently unmoved, so Emma stayed in the corner near the door so she could beat a quick retreat if necessary.

Eventually, and not without a lot of extra problems, the Captain finished the job. The O-ring that came with the new set was the wrong size. Then the plastic of the drain pipe under the sink broke and had to be replaced with a new piece. That new piece had threading that was a different size from the old one (we thought it might be the change from the standard measurements to metric, but no, the supplier told the Captain it was just that different brands have different specs). Can you imagine trying to plumb a house with those inconsistencies?

At last, the new faucet set was installed and everyone was relieved that the job was done, especially Emma. 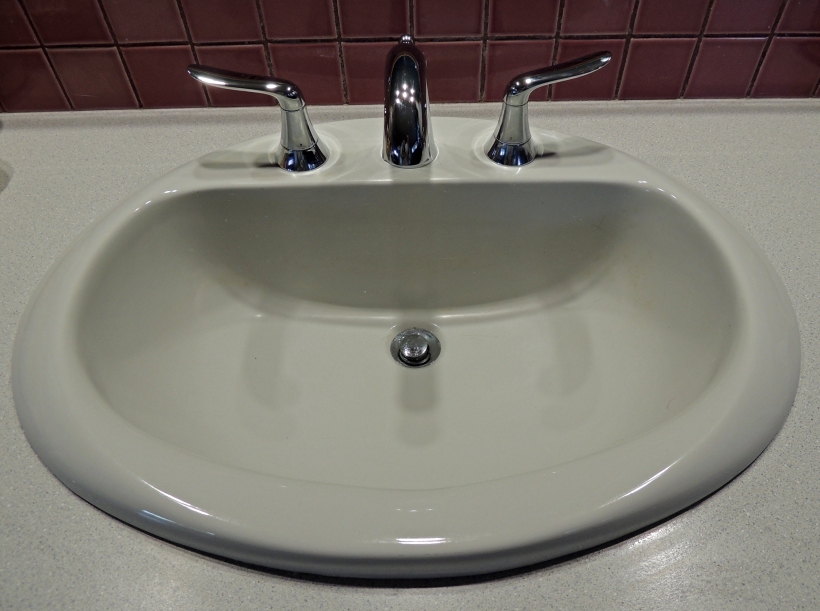 I made a short video clip of Emma’s interaction with the monster sink. The Captain growled, mean of him, and Emma looked for safety.

30 thoughts on “The Monster Sink”