I can’t help but blog.

While taking a break,

I started to bake,

I thought it looked good

But this photo for you

Is the best I can do. 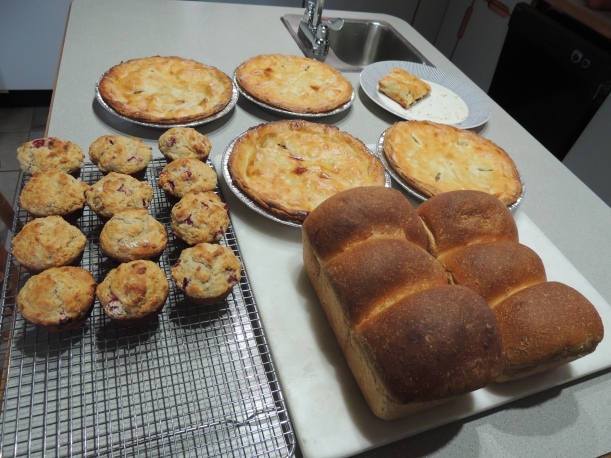 The loaf on the right

Is a terrible sight,

But the scrap piece of pie

Was consumed with a sigh.

I’ve never taken a  break from blogging since I started this blog in 2011, but I think it’s time for a breather until after the new year.

At this time, I often think about people who have lost loved ones they miss even more than usual around this traditional family time. I tell myself that if it were me, I would manage to get through the hardest times by remembering the lost ones with good memories of them. If I need to have a little cry in private, so be it, but then I would pull myself together and try to focus on the joy of others.

Soon a new day will begin. It will be just another day without all the traditions that come with bittersweet memories attached, but it will be a new day and a challenge for me to make the most of it.

I like to think ahead and make plans and goals and things to look forward to – one of the reasons I love January.

I want to thank you all for being there. Blogging would not be fun without you.

I hope that, whatever form your celebrations take at this time of year, you have lots of warm, fuzzy  times with friends and family. I look forward to seeing you on your blogs and mine in the new year.

Yesterday, on a rare sunny day I was coming home from town when I had to make a quick photo stop. The mist and cloud formations across the bay were ominous, warning of the next weather system coming in.

I turned the camera back towards town. The spread of the clouds stretched along the far hills. In the water is a long row of posts that has been there ever since I can remember. Not sure what purpose they once served, unless it was a  navigation guide. The posts still stick out at high tide and warn boaters of the bar.

As you can see below, some posts still show in places where the bar is farther below the surface, and the trunk of a long-dead tree is hung up on the gravel. This is not where you want your boat to end up. Seagulls and a heron sit on the log like sentinels warning of hazards to navigation. 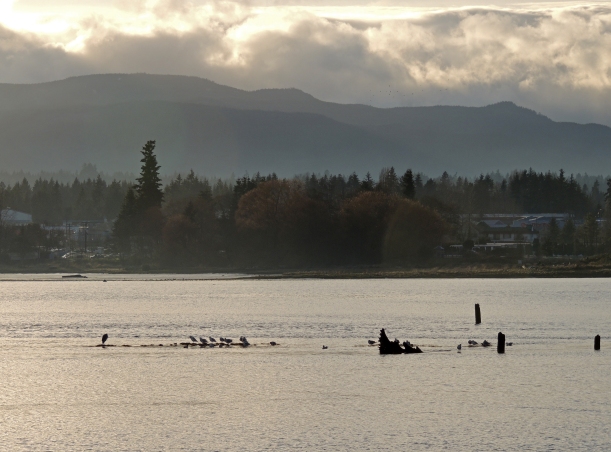 After a slightly deeper stretch of water, the bar comes up again and continues into the bay. A river flows along the side of the bar that is closest to us (at the bottom of the photo), while the water beyond is a shallow bay that is a mudflat at very low tide. If you want to bring a boat up the river, you need to know where the channel is or end up with seagulls sitting on your hull.

The sandbar is a popular place for birds to dabble and sun themselves. Sometimes you’ll find ducks and geese there; sometimes, like this day, seagulls.

The sun came blasting through the clouds for one last look at me. I clicked the camera as I looked back into its blinding light, knowing I might not see this light for days ahead.

This morning I see that I was right. Looking out my living room window, I saw what was behind those first clouds I saw yesterday – a blast of southeast duck weather.

It’s a good day to stay home while the Captain goes duck hunting.

Winter on the coast is wet,

Wind and rain is all you get,

Sometimes there’s a glimpse of sun,

Back we go to wind and rain,

Hope by spring I’m not insane.

Don’t be fooled by this butter picture. I tried to use less than the recipe called for and it didn’t work. You need the full cup of butter for the crumble to stick together.

So! Put one full cup of butter into the food processor. Then add the flour, salt, and cinnamon. Give it a few pulses until the butter is finely mixed with the flour mixture. THEN add the sugar and rolled oats and give it a couple more very short pulses – just enough to mix it all in.

Why not put it all in together? If you put the sugar in sooner, it makes the butter smear a little, and if you put the rolled oats in right away, the blades will cut the flakes up into a fine oat mixture. I like to see the flakes and keep them coarser, but if you want them to be smooth, you know what to do. 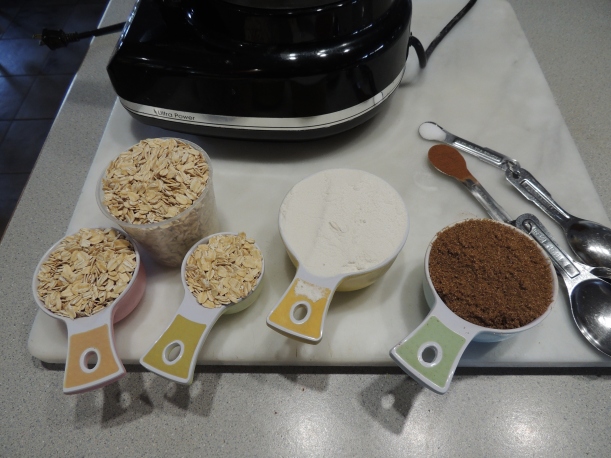 Pour about two-thirds of the mixture into an ungreased pan and press it flat with gentle pressure using your hands. 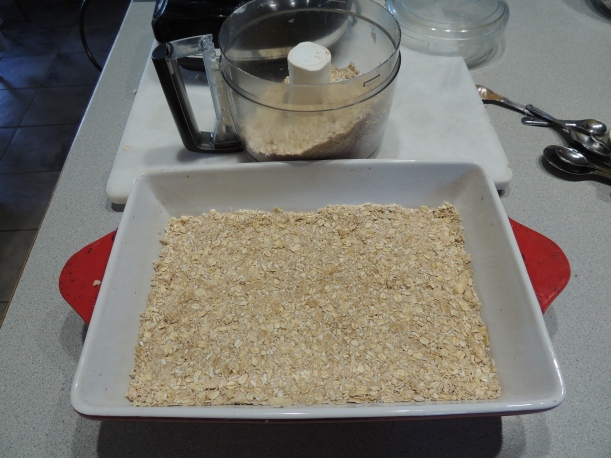 Now for the plums. I have plum trees in my backyard so in the fall, I wash, cut and freeze the plums, 24 to a bag because that’s how many it takes to make a cake. They thaw easily in warm water  for use in this recipe. If you have plums available in the store you can buy them to make this cake. If not, you may want to substitute some other fruit at this point. Apples, pears, apricots, and dates should work well for this dish. I wouldn’t try it with berries as they would make too much liquid, but most other fruit is very forgiving as a substitute.

I’ve tried it with apples and pears and they work very well. With pears, I’ve used powdered ginger instead of cinnamon.

Notice that the plums are placed skin side down, so the juice doesn’t soak into the bottom layer of crumble.

Sprinkle the last third of the crumble mixture over top of the plums (or whatever fruit you use).

Bake at 350 degrees for 40 to 45 minutes. Usually when the fruit starts to bubble, it’s time to take the cake out of the oven. 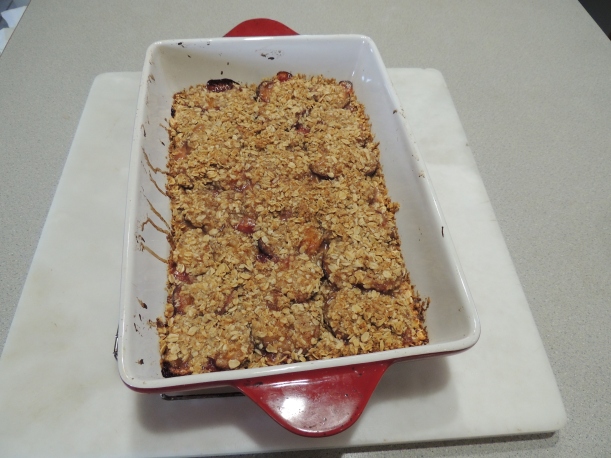 When the cake is cool, cut it into squares and top with ice cream, whipped cream, or have it just plain. It’s good no matter how you serve it.