It was an owly night. I couldn’t sleep for the sounds of hooting and hissing and screeching right outside my bedroom window. But WHERE were they? I needed them to get rid of those pests.

Owls are not the only animals on nightshift.

Look what that destructive little bunny did to my front yard. I don’t know what he’s digging for. I suspect it’s the roots of those tiny dandelion-like flowers (weeds). He must have heard the owls, but these roots are so yummy (I guess), it’s worth the risk of becoming dinner himself.

He deposits some tiny raisins of fertilizer – a snack for Emma and Ruby –  to show his appreciation for the midnight snack, but … those huge holes are everywhere. 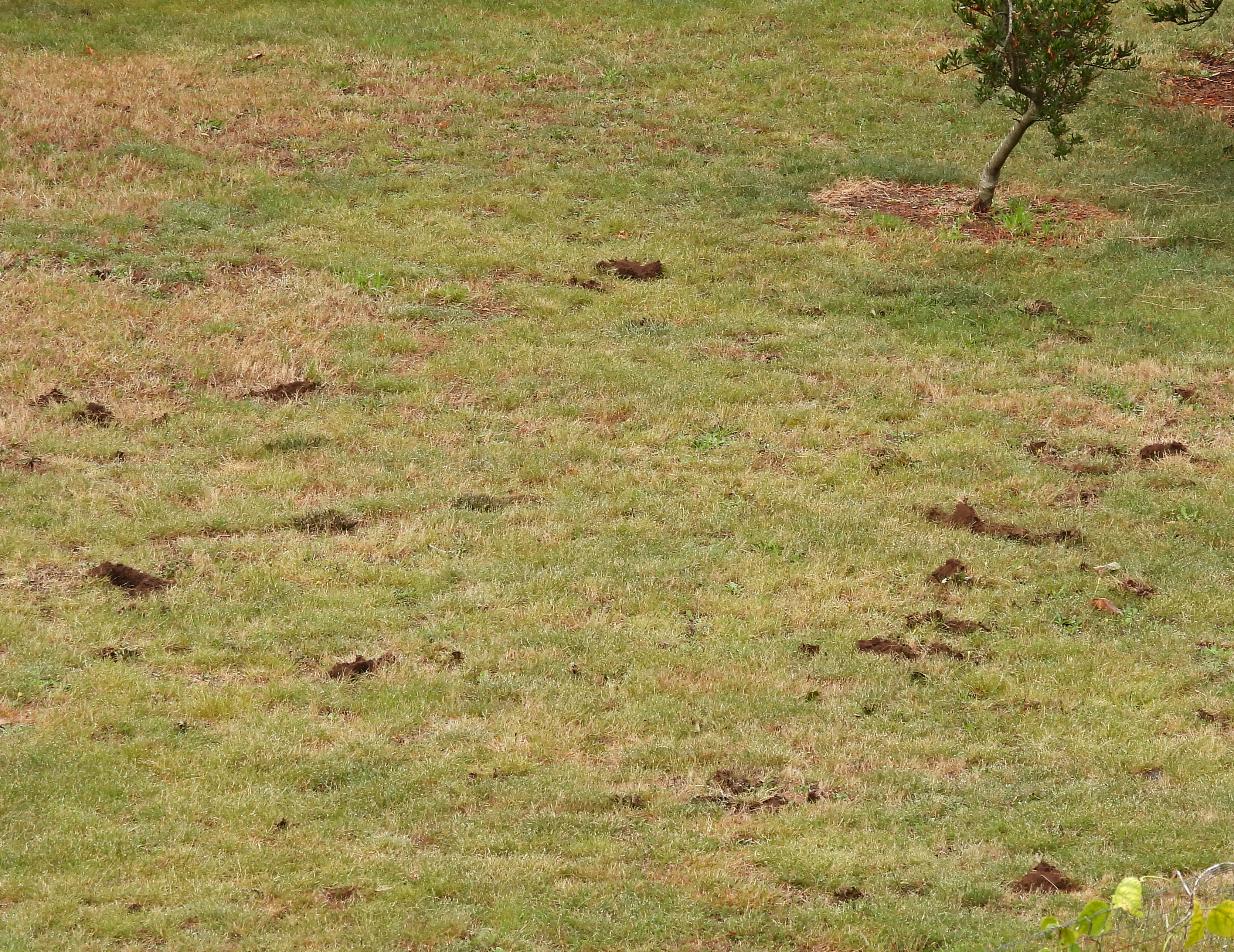 Einstein and the junior professor are asleep at the switch. I guess that’s what happens when you stay up all hootin’ night.

The night was black until the moon

Lit up the darkness and the gloom,

“Soft lighting on our dinner plate,”

Glide down with me. I’ll show you how

As Einstein swooped on silent wings

The bunny leapt, he heard the whoosh,

As talons missed his ears and tush.

Into the hedge he slipped away

“I’ll eat those roots another day.”

“The holes I’ve dug will still be there

I’ve dug so many everywhere.

I know that Anne-li will be mad

And curse me out for being bad,

But everybody’s got to eat, 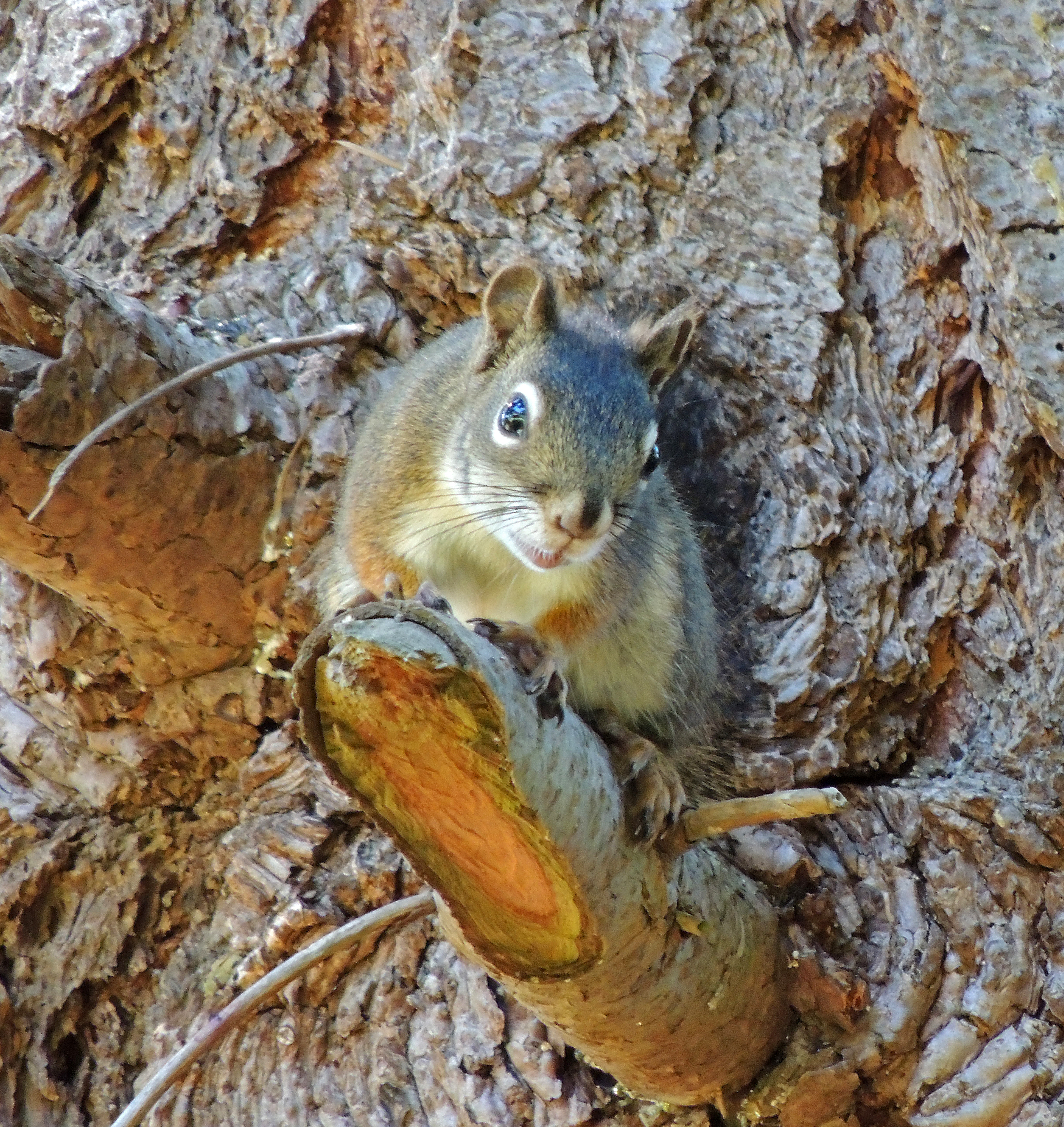 And he’s brought the whole hootin’ family. See them both in that tree?It’s not even completely daylight yet but he’s probably promised the junior professor some fresh squirrel for breakfast. Well, I’ve been told I’m a bit “fresh” but owl be darned if I’m going to be their breakfast.

These guys are sneaky. To be honest, they have me shaking in my boots. But I’m going to make a quick getaway into this woodpile. As if I give a hoot what they eat for breakfast … as long as it isn’t me, that is.

I’ll just scold them while you watch these videos. The little birds are a bit upset too this morning. No wonder! If you think the pictures are a bit shaky, that’s probably from my boots as I shiver until Einstein and the junior professor go away. Excuse me while I yell at them. “Why don’t you two professors go do something useful and go kill a rat?”

This female house finch has just had a bath and is now looking for a snack on my brussels sprouts plants.

These tasty sprouts are still so small,

That’s not much food for me at all,

To peck them isn’t worth the work,

I’ll have to find some other perk. 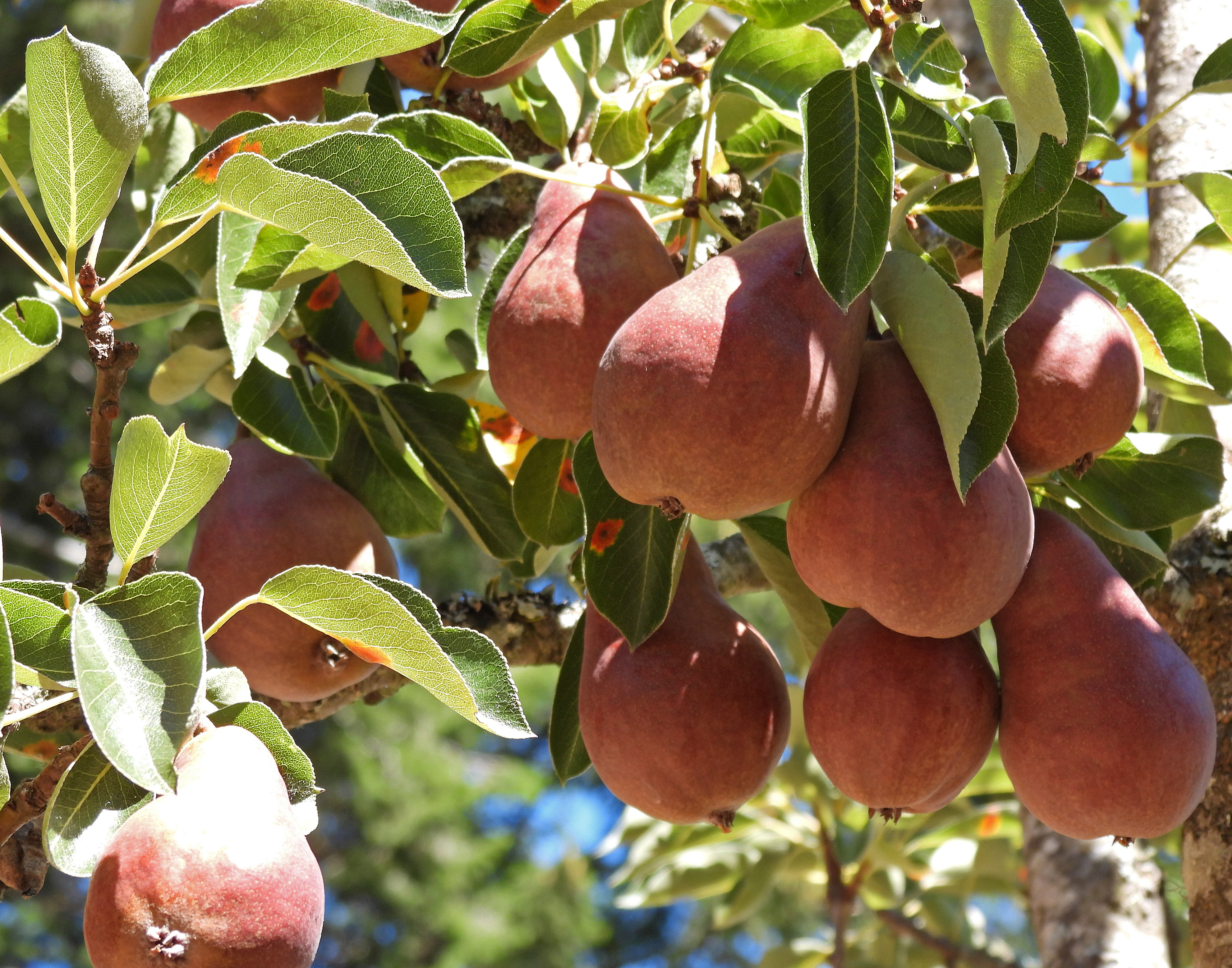 So many pairs of pears I see,

Too many hanging in one tree,

Too big for tiny little finches,

I’d get fat and put on inches. 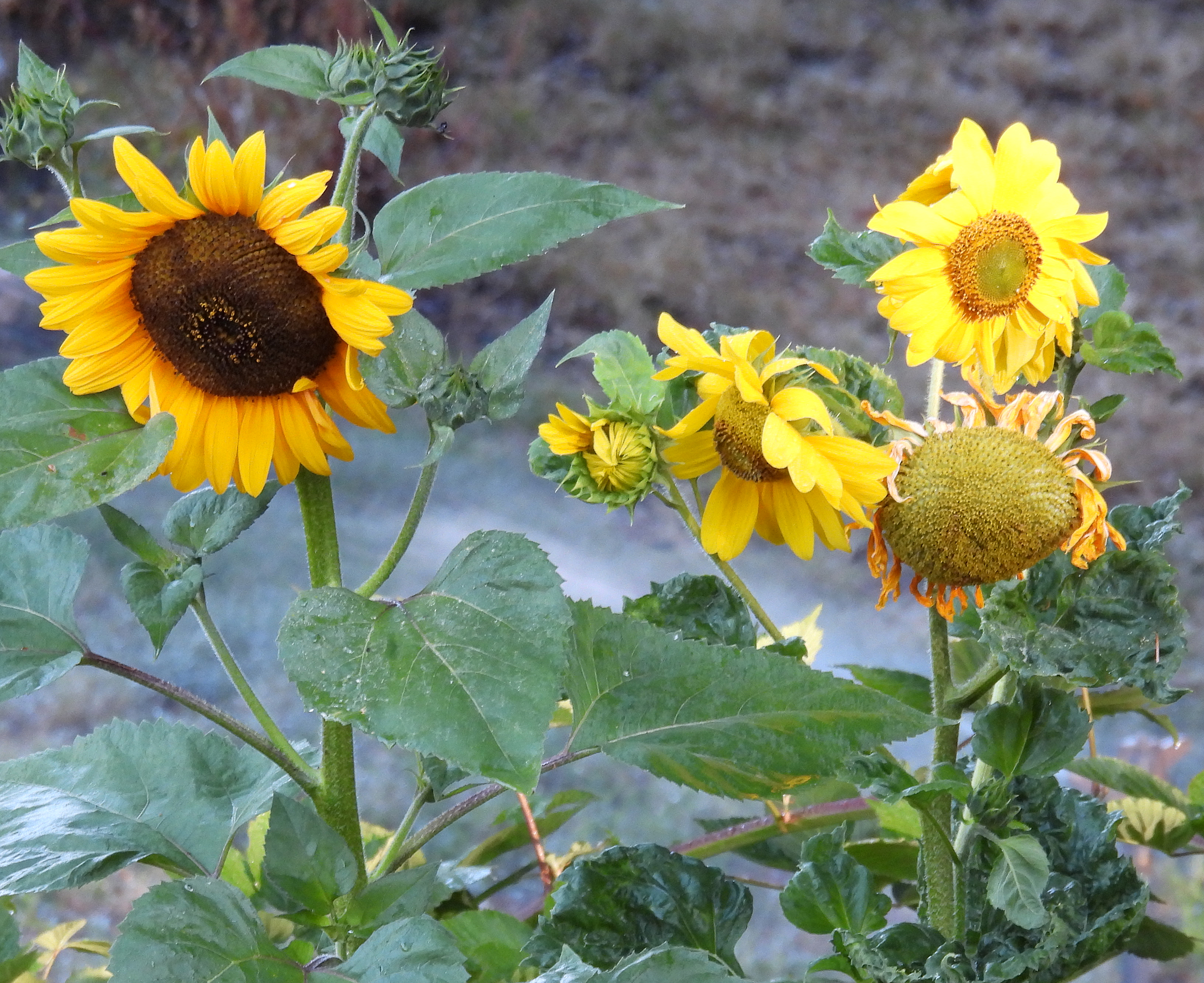 The sunflower seeds will soon be ripe

And then I’ll have no cause to gripe,

They are my favourite snacking food,

To nibble them improves my mood.

See those messy leaves on the grass? Lincoln is to blame for that. He’s been carousing around in the filbert trees, stealing the nuts, just like he did last year. He doesn’t care if the leaves fall because some of the nuts do too.

He’s up in the tree, but thinks no one knows. I see him though, where the nine would be, if you imagined a clock on this picture. See him?

Here’s a blurry close up, but he’s in there.

He’s been bringing the filberts over to the woodshed and stashing them under those long landscape ties stacked up at the left of the shed. Later, he brings them out one by one and peels the husks, sometimes hiding just below where those three floats are hanging.

That’s a lot of peeling, Lincoln. 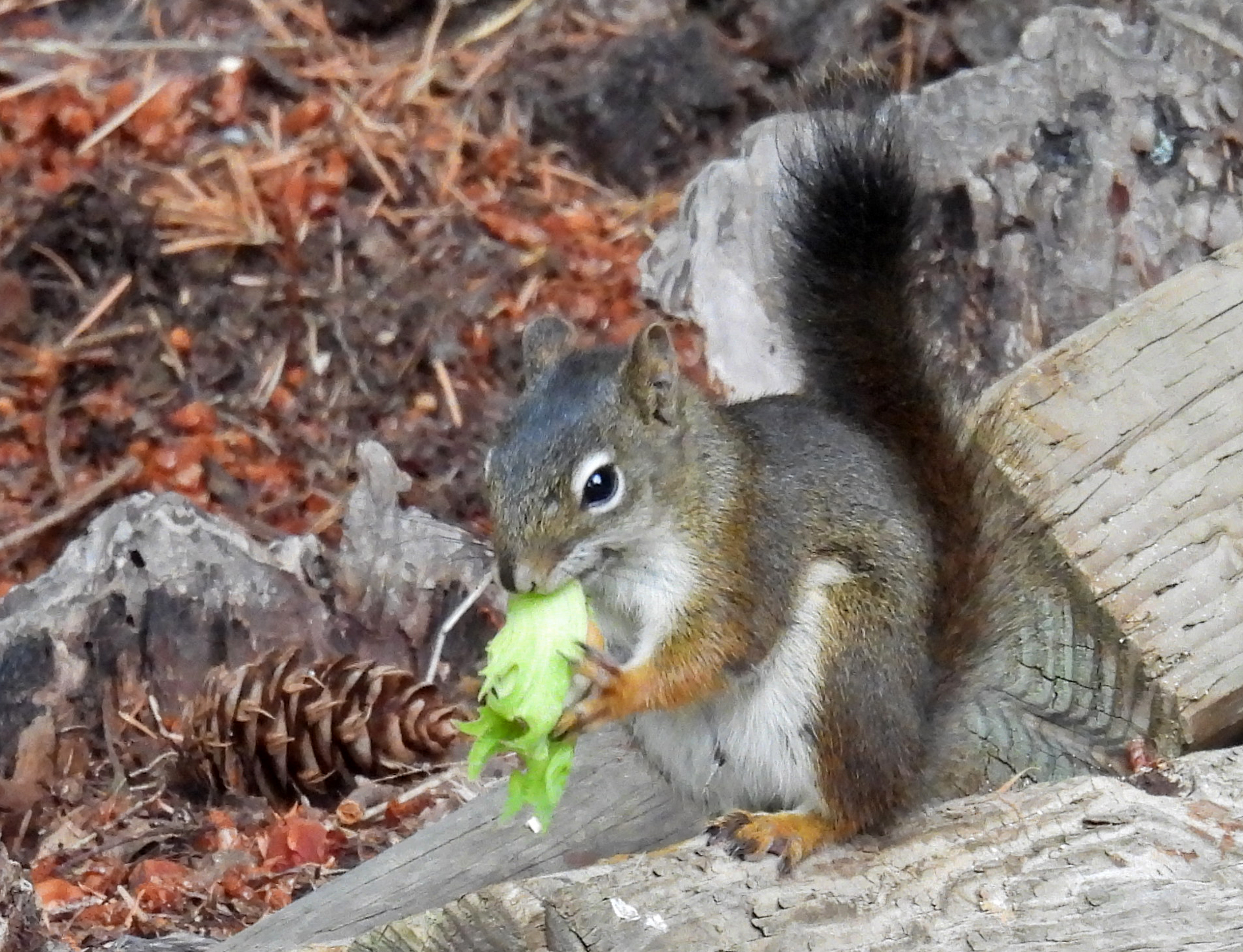 “You’re telling me!” he says with his mouth full.

But look,” he says. “Look how pretty they are once they’re peeled. Ready for the table some cold winter evening.”

“Now, to find a place to hide them until I need them. Nice of them to leave the ladder for me, but I can climb trees without them. And anyway, I’m looking for someplace on the ground to bury them. Oh! I see a place right at the bottom of this stump.” 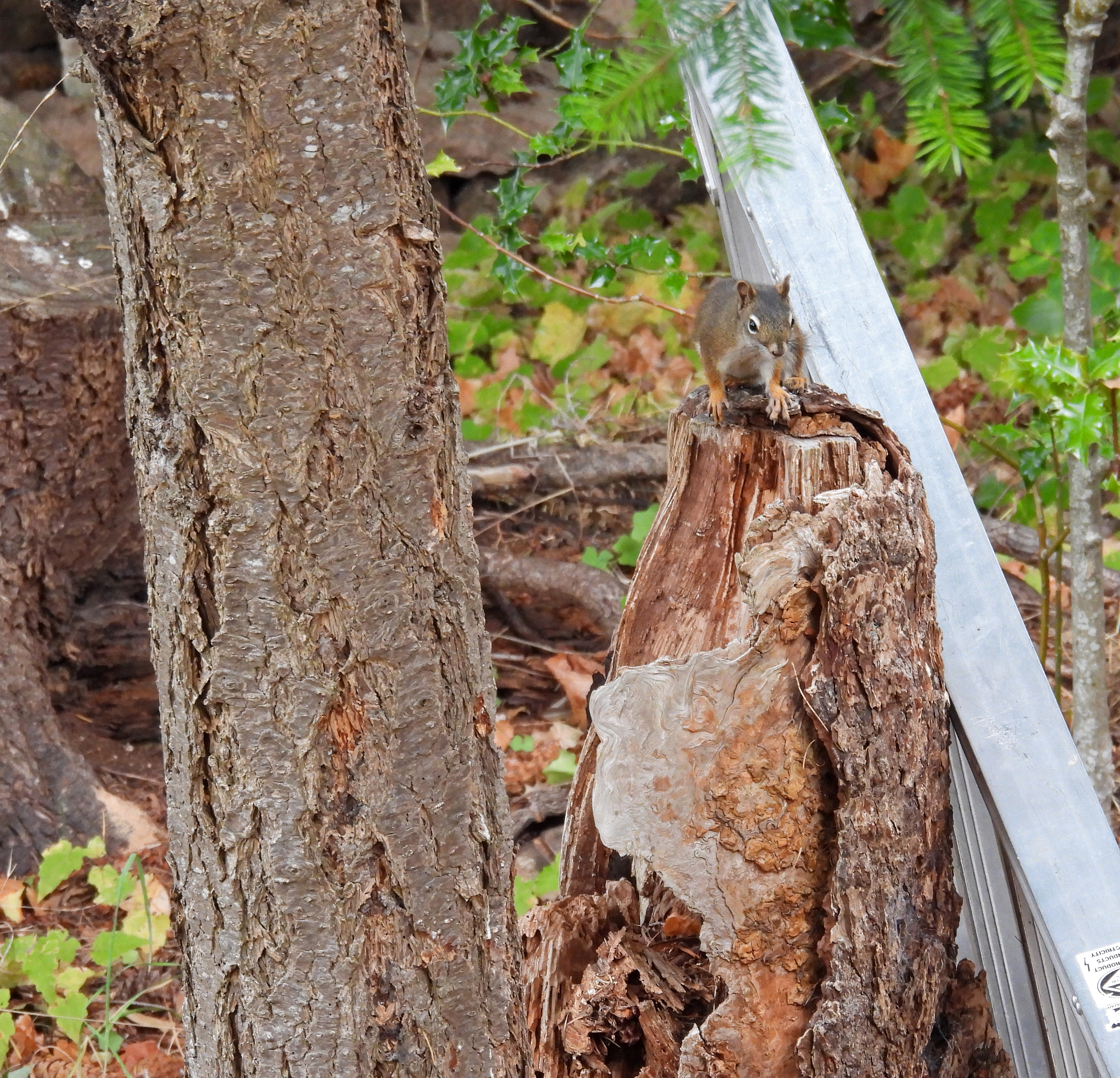 “Nice soft dirt for digging. Close to the woodshed. And I won’t forget where they are because the stump is there.”

“Wanna see me do the Super Dig? Watch this short video, starring yours truly, Lincoln. I’m better with music, but the crickets are doing their best to accompany my digging dance. So when the winter weather comes, I’ll know where to get a snack. Then I’ll take a filbert or two to my cozy bed deep in the wood shed and sit back with my Kindle and read some of Anneli’s novels. You can check them out by clicking on their covers at the side of the page, or by going to her website.”

Lincoln was minding his own business when he thought he heard a soft, croaky voice calling, “Eh?”

“Who’s that talking to me?” Lincoln asked. “Oh, NO! It’s Tony the Terrible. I don’t mind sharing a bit of the food but he’s so messy!”

“Who’re you calling messy? It was like this when I arrived.”

“Found one, but what’s the taste going to be like?”

“Meh! Just as I feared. These ones that are lying around are getting a bit stale. So much for cleaning up.” 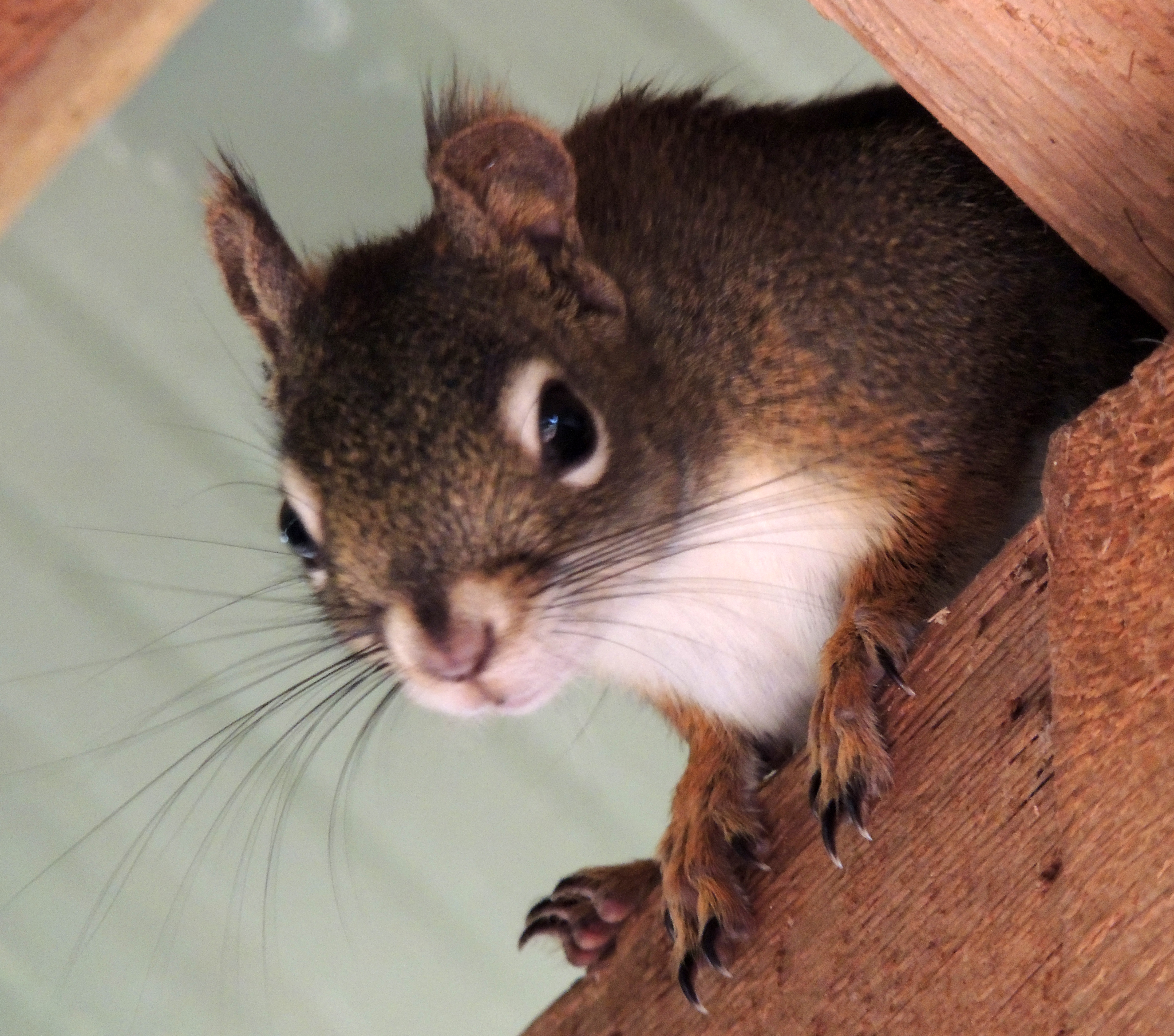 “Oops! I think lunch is over. I’m going to get a quick ‘Take-out’ and skedaddle. I don’t think Lincoln cares about social distancing and I don’t like him when he gets mad.”

“How do you like that? He’s cleaned me out! No wonder they call him Tony the Terrible.”

“Guess I’ll just have to go harvest some more fir cones. But what a lot of work!”

It was a glorious morning, very early.

“Caw! Caw! Caw!” came the ugly croaking call of a crow, summoning his cohorts to make a try for the breakfast that was about to happen when Robbie, Ryan, Ross, and Roberta left their robin’s nest.

I picked up some pebbles from the yard, grabbed the slingshot and went looking for the murderers who threatened to skewer the baby robins with their sharp beaks, much like hors d’oeuvres at a cocktail party.

As I walked down the path in front of my house, the crows flew away, and I stood a moment to admire the view.

I took a few breaths of fresh sea air and turned to go back home. Just then, something burst out of the two-foot-high St. John’s wort shrubbery at the side of the road. It flew up onto a fence rail about ten feet away and stared down at me.

I hurried into the house and traded the slingshot for a camera.

It was much farther away now, and I had to zoom the camera. It’s a bit fuzzy, but I was still thrilled to get any kind of a picture of this great horned owl.

Later I saw what it might have been after. 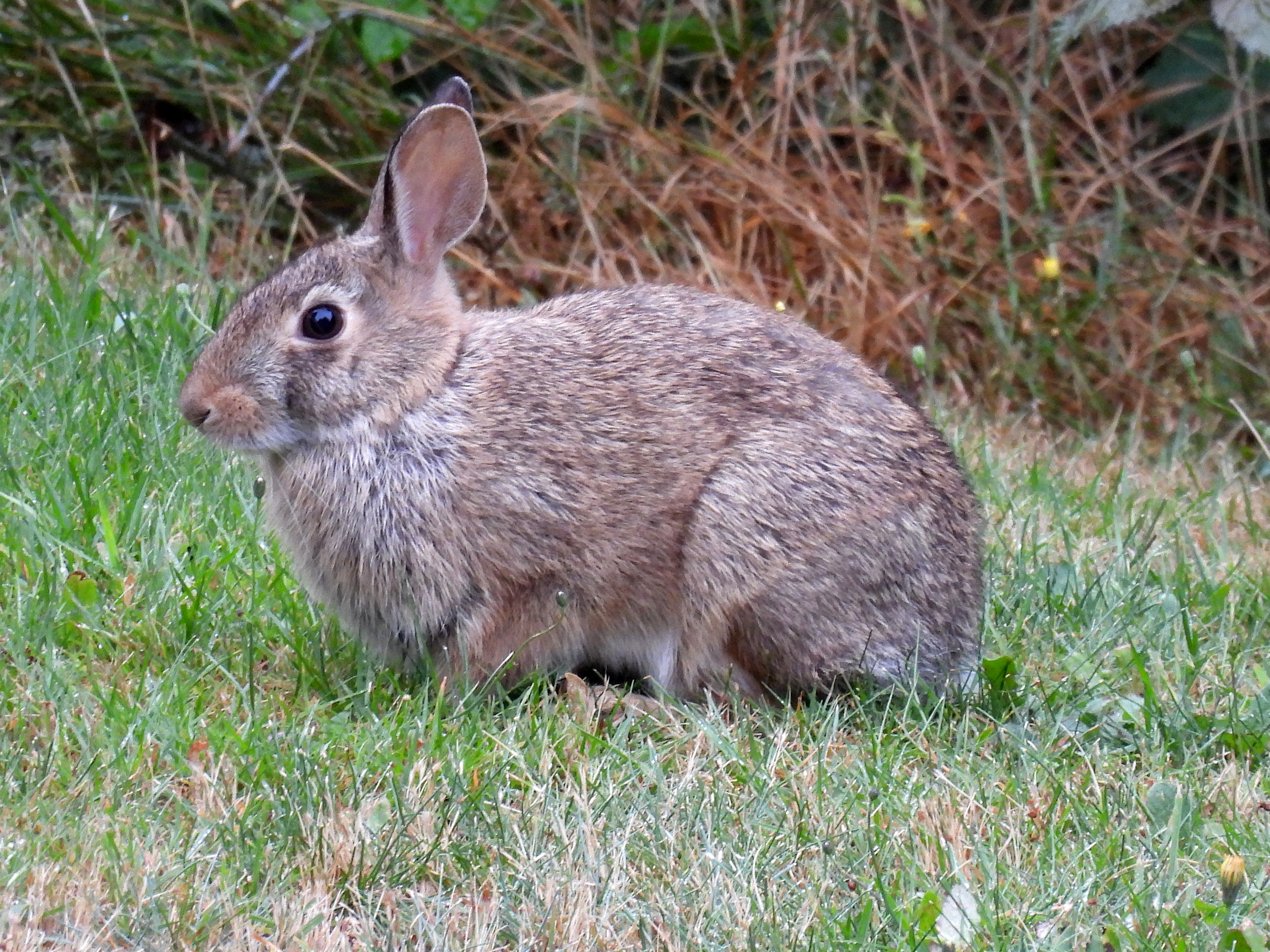 Sorry for the blurry picture of Emma. She can NEVER sit still.

And Ruby, patiently waiting for her breakfast. 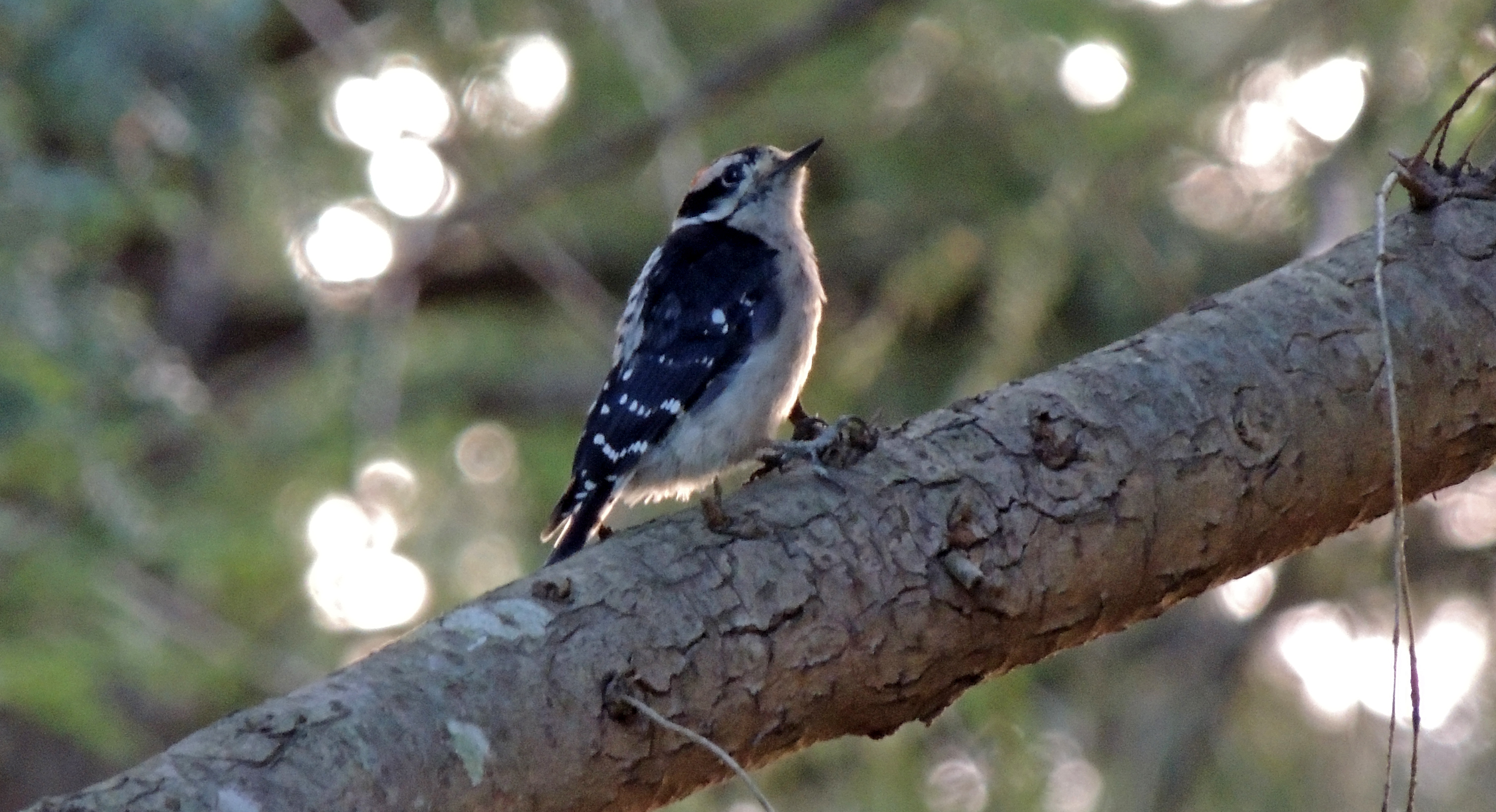 Farther along, on the same branch, Harry, the hairy woodpecker, edged closer to Robbie’s nest. “You guys should get out while you can. Don’t you know there’s crows around? We got out a couple of days ago and they’re still hovering near us.”

“Naaah! They wouldn’t bother me. I’m big and tough. See how tall I can be?”

“Brother Ryan left the nest this morning. I guess I’m next. Not sure what these little guys are going to do.”

“Roberta’s not looking too happy, but I think Ross will fly out with me. See him right here next to me. He’s ready.”

And in fact, that’s just what happened. The big goons left little Roberta alone in the nest, crying her eyes out.

Then finally with one panicked PEEEEEP, she leaped down out of desperation and flapped her wings with all her tiny might.

And a new adventure began.

It’s crowded in the old homestead

With only one small room,

Her outlook full of gloom.

When Ryan flew, the other boys

Roberta stood there all alone

And all she did was grieve.

She called her mother loud and clear,

She called her father too.

They heard her but said, “Berta, dear,

“It’s so far down and I’m alone

With no one helping me,

I do not want to die so soon

By falling from this tree.”

Your other option is to stay

And be forever sad.”

Roberta plucked her courage up,

She shrieked and then she leaped,

She flapped her wings and on the ground

With happiness and wonderment

At being on the ground,

Roberta blinked her eyes and said,

“My whole life lies ahead of me.

I have to do my best

To make it last a long, long time

Before my final rest.”