No rain all summer, until a couple of days ago. At last, at last, the skies opened up and water poured out.

The drops of water on the deck made beautiful rings on the wet surface. (Well, I guess they look pretty ordinary, but I was overjoyed to see them.) Ask me again in January if I still love rain.

Wildfires sizzle and burn out,

Rain pelts down on them.

My parched throat croaks out complaints. The smoke blankets the coast and most of Vancouver Island. For several days, until yesterday, our area has been rated as 10+ (very unhealthy) on the Air Quality Index.  Last night a little breeze brought the rating down to 2, going up to 4 today. Relief for  dry, raspy throats, coughing lungs, aching heads, and itchy, red eyes.

As I researched other areas affected by the more than 560 fires in the province of British Columbia, I learned that some places have far more serious air quality issues than we do here on the coast.  Knowing what we are suffering here, my heart goes out to the people who live in those hardest hit areas.

The whitish-gray part of this photo should show blue water of the bay and greenish hills beyond, but none of that is visible  here. The smoke hangs in the nearby trees as if someone had a campfire going.

You can see the impact of a long, rainless summer on the grass in my front yard. It doesn’t even look yellowish brown as it should, but has a pinkish tinge from the red smoke-covered sun.

I’ve had my hedge trimmed and the trimmings are yet to be picked up. Just waiting for a slight reprieve from the heat. I feel very lucky to be able to think about mundane things like trimming a hedge when many hundreds of people in the province have had to evacuate their homes and manicuring their yard is the last thing on their mind.

During this summer’s fire season I have definitely learned to appreciate having a home. And having had to do without clean air and enough water, I know how important these things are — the essentials of life.

The last of the evening sun’s rays add a sweet pink tinge to the rare scattering of clouds in the eastern  sky. I’ve been watching for clouds, desperately hoping for a few drops of rain to end weeks of sweltering heat and parching drought.

I turn to the southwest. The glow of sunset touches clumps of cloud and wisps of smoke that have drifted into the valley from faraway wildfires.

I turn a few more degrees to the west and I’m left wondering if this is a sunset or another of those raging wildfires I’ve seen too much of on the television news. But yes, it is the sunset, searing us for a few more moments before allowing us to recover from yet another day of being barbecued.

We’ve been promised rain for today, but somehow, I don’t think it’s going to happen. The clouds that have moved in are way too high and way too thin. Just a hint of hope for relief someday, but probably not today.

Please remind me of this whining post a few months from now when I complain about the relentless wind and rain.

Early in the morning, the sun’s first rays hit the top of the hills and one lonely leftover cloud. I’ve learned keep the camera handy and to drop everything when the light is right. Sure enough, less than a minute later, the light changed and the magic was gone. 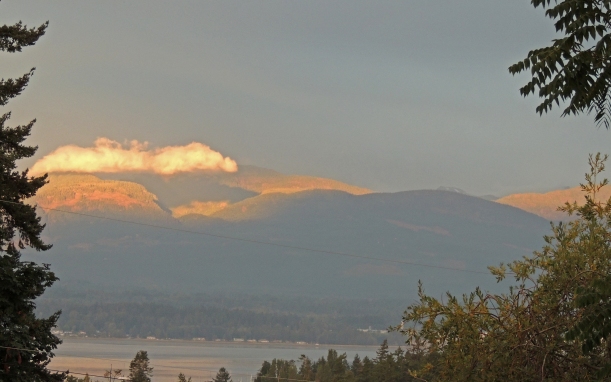 I didn’t have the heart to add

Another drop of rain

With all the cloudbursts you have had

It could become a pain.

I’d rather brighten up your day

With promises of joy

For drought relief, a price you pay

Too much rain can annoy.

Think RED. Now imagine this full moon as red as the ring around it. That’s how it really looked. The smoke in the air gave the moon the colour of blood. I’m sorry my camera doesn’t show how red it was.

I thought it was interesting that the end of a tree branch is silhouetted against the moon’s face.

The next day, as Paul Simon said …

It was a sunny day,

Not a cloud was in the sky.

Not a negative word was heard,

From the people passing by.

Not clouds made of water anyway. It would have been a bluebird sky if it wasn’t for the smoke. The sun was so red last evening that I thought I was looking at the red planet in a science fiction movie. It was eeeeeeeerie! Again, the photo doesn’t show the true colour I saw. Like the moon the night before, the sun was blood red. Today it’s more of the same. Smoke fills the skies.

We have natural disasters all over the world. Wildfires, floods, and hurricanes. These are all extremely hard to deal with. What I don’t understand is why we need to add man-made disasters (terrorism, political power struggles, crime, and war) to the mix.

I just had a note from WordPress letting me know this was my 500th post. My first reaction was, “Wow! Isn’t that great?” but then I thought, “Uh-oh! Am I talking too much?” 😉