Today I put dry chopped up leaves into my garden to keep the winter weeds down and add organic matter to my sandy soil in the spring.  I noticed that some of my strawberries had leapt overboard from the raised bed and were looking for a new home. To dig them up I moved the long board that lay alongside the raised bed (this board once helped to anchor the netting I had over the strawberries). I pulled the board forward and found hazelnut shells, all empty, and all opened from the top (not cracked and left in two halves).

The stash of hazelnuts went down the whole length of the raised bed. Each one was empty. Each one opened the same way, with the top eaten out, presumably by something with a small jaw and sharp teeth.

Not my Lincoln then. That squirrel would have hidden and stashed the nuts, possibly buried some near the trees where he sleeps, and the shells would have been cracked lengthwise.

Some weeks back I had seen a mouse in the strawberry bed, but this was a huge stash for a little mouse.

My main suspect is Templeton (E.B.White’s rat). Since Charlotte’s Web, every rat in the world is named Templeton.

He is very brazen, but he’s cute, don’t you think? Once he tried to build a nest in our old truck. That was not so cute. He even went for a ride in it and came back without falling out. We had known he was in there but couldn’t get him out (until much later). After the Captain drove to the wharf to check the boat and came back home, Templeton was still hidden in a space  in front of the door hinge. 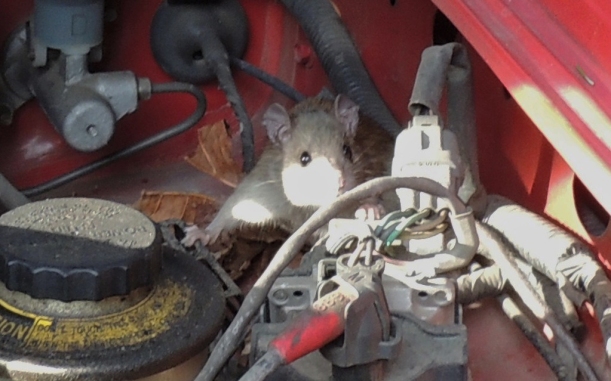 So tomorrow I’ll go out to the strawberry bed and see if there is a tunnel dug through my  newly added leaves that I put over the entrance at the side of the treasury board.

A little over 30 years ago, I lived in a poor house with a rich garden. The soil had been worked for years with many natural additives from the small farmyard animals the former owners kept.

I rolled up my sleeves and worked the garden with gusto and energy. With the Captain away commercial fishing all summer, I built my own greenhouse (it does look a bit like a woman built it, but it was functional). I even had a little cold frame that you can see beside it on the left, and an old-fashioned compost bin at the back of the garden area. I had a great garden.

Later that summer, everything had grown like crazy in that richly composted soil.

Then we moved to a rich(er) house with poor soil. The place had no fence and deer were always around. I grew a deerproof herb garden, but couldn’t grow much else.  In time, the area became a popular dog walking destination  and people from the subdivisions would let their dogs off leash as soon as they saw a tree.

It was no longer possible to have an unfenced garden. Trying to grow anything in the poor soil was hard enough, but adding to my frustration, were many of these “born free” dogs coming from other neighbourhoods tearing through my garden. Their owners sauntered along the road and had no care where Fido had gone.

I gave up on my garden. But the dog situation got so bad that we couldn’t let our own dogs out for fear of confrontations with visiting “stray” dogs. We built a fence around the yard. The pheasants and quail that used to wander through were long gone anyway, and it was time to reclaim our privacy.

I tried to rebuild the garden, but we had new pests. It seems that one year, undeterred by the wide meshed fence around the yard, the Easter bunny came here (presumably with Mrs. Bunny in tow), and after he whispered sweet nothings in her ear, they “went forth and multiplied.”

“Verily, verily, I say unto you, ” the Easter bunny said to Mrs. Bunny, ” ’tis a veritable garden of Eden here.” (He must have gotten the wrong idea when he saw the name plate of the Captain’s fishing troller tacked on the workshop.)

A bit of lavender and rosemary still survive. But my garden was dismal. What I really wanted was a garden that would grow decent vegetables. Disheartened by the obstacles over the years, I had almost given up. Even without deer, stray dogs, and rabbits, I still had little more than pure sand to work with.  A waste of time and effort!

But then, the Captain came to the rescue. He built four raised beds and brought a load of garden mix soil from the composting yard. And see the promising-looking gate! He would build me a rabbit-proof fence.

Corner posts went in and were braced.

Three of the raised beds already had better soil in them.

A narrow meshed wire was strung and pulled tight with the help of a come-along winch.

Fencing done, now it was my turn to get the last bit of sod turned over and my garden planted.

I have a few squash seeds already growing. Once they came up, they grew so fast, I had to put them into bigger pots (which I didn’t have).

These “Lean Cuts” dogfood cans are all I had handy to use for temporary plants pots. I hope the squashes don’t end up tasting like dogfood. I’ll let you know.