Vernon Lake on northern Vancouver Island is a good-sized piece of water. Expect lots of gray days, with misty clouds, some moving around the lake, some hanging onto the hilltops nearby.

If you are in a small boat, watch for the many partially submerged logs, especially near the shores. The area around the lake was logged long ago, probably more than once, by the look of the different sizes of trees.

Some of the trees have been in the water for so long that the exposed stumps have decayed and supported new plant growth. Sorry for the blurry photo of that one. It was a quick afterthought photo on a drive-by in the skiff.

Some stumps had not had time to develop growth yet. Instead they took on the role of sea monsters guarding the passageway to the far end of the lake.

At that end where the river flows out, the lake narrows like a funnel. Along the sides of the ever narrowing passageway, stand snags of trees that were probably drowned years ago by the rise in the lake’s water level in the rainy season. It looked to me like Snag Alley.

The water was so clear you wondered if it was really there, except that it reflected the greenery from the shore. 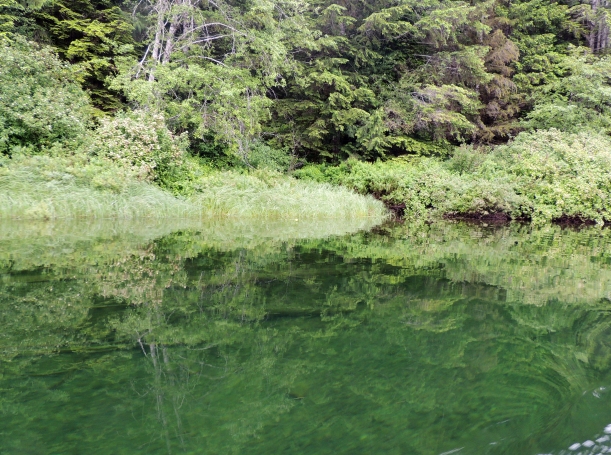 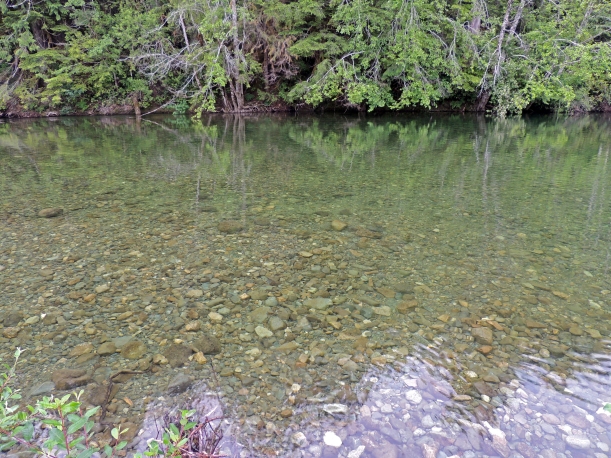 The Captain did his best to catch a fish after scrambling to get all his ducks in a row.

Either our timing wasn’t right, or the Captain was hampered by having to set up the Admiral with her fishing rod, but by the time he was able to dabble, it was not a fishy time for him just then and there.

Or possibly the fish didn’t take him seriously because he wasn’t wearing all his top-of-the-line brand name fishing paraphernalia. (The Admiral didn’t care about that stuff as long as he had the bear spray along.)

Anyway, supper that day was not going to be fresh gourmet fish.

It was time for one of my favourite sayings: Tomorrow is another day.

Some time ago this bird visited my yard, and at the time I had no idea what it was except that it was a type of woodpecker. Since then I have learned that it is a red-breasted sapsucker.  In the second photo you can see the light dot in front of its eye, one of the main identifying features. It also has a vertical white bar along its wing.

This fellow visited our campsite at Vernon Lake on Vancouver Island last week. 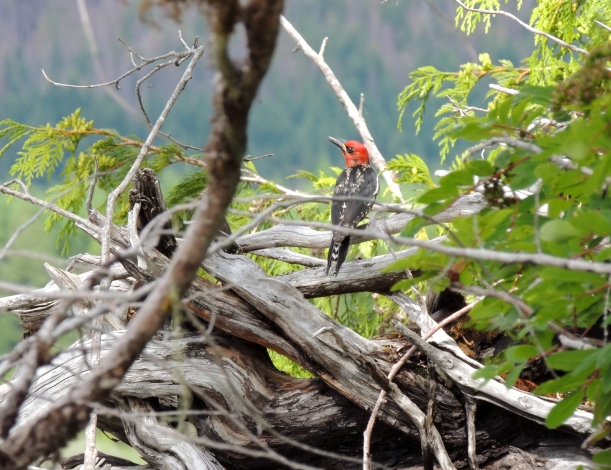 It was a treat to see him there, as they are not seen as often as the more prolific birds of the area. 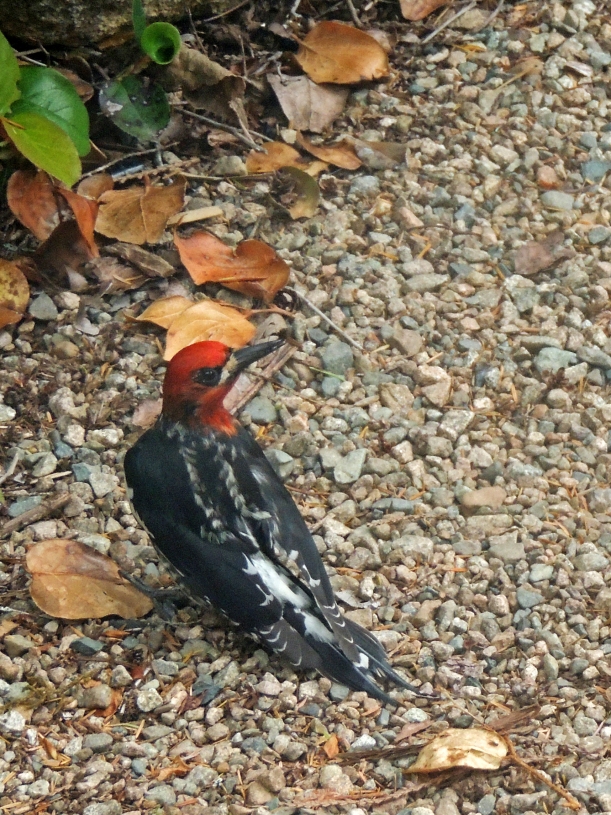 Don’t you bug me while I eat,

As I’m looking for a treat,

I peck holes into the bark,

What a shame, it leaves a mark,

Not so healthy for the tree,

But provides some food for me.

Either way it’s food to lap,

With my tongue, I slurp it up,

Better than a sippy cup.

Folks aren’t happy when I peck

In the trees, but what the heck,

Everybody needs to eat, 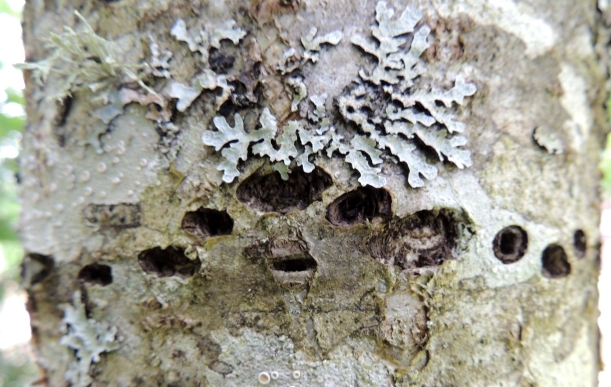 I wore down my camera battery with all the zooming and unzooming, hoping this guy would hold still. But he had so many flowers to visit, he couldn’t make up his mind which one to rest on for more than a second or two.  His name is Papilio Rutulus and although he’s a western tiger swallowtail butterfly, it seems that something has swallowed his tail. 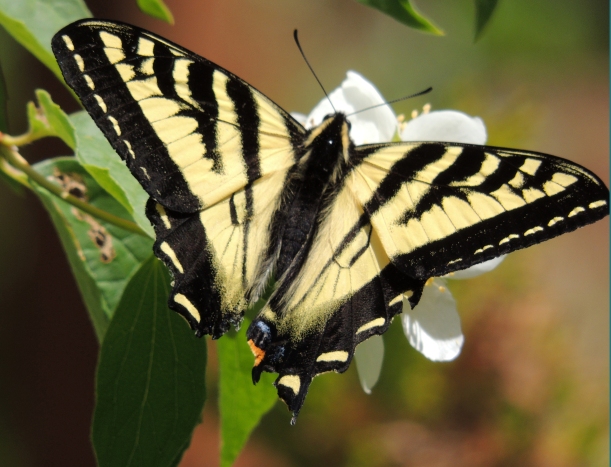 Could it  be a hungry bird

Who thought he’d eat him? How absurd.

Nothing tasty on these wings,

Not a bit that nourishment brings.

Maybe branches beat his back

On the piece he now does lack.

In the wind the twigs can whip

Snapping blows, and wings can rip.

I’m so sorry, my poor dear.

Glad it doesn’t change your flight

As you flutter out of sight.

Okay, Junior, forget about pecking at houses. This is how we find the best bugs — on the trees. You hold on with your toes and hop around all sides of the tree. The tree doesn’t mind. It thinks we’re hugging it. 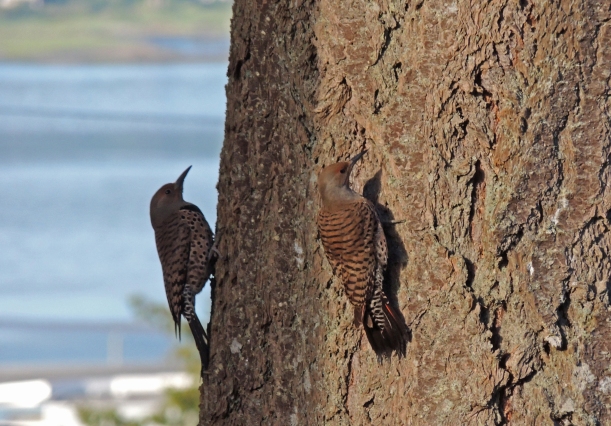 And keep an eye out for hawks. They like to snatch up flickers, especially young naive little morsels like you. 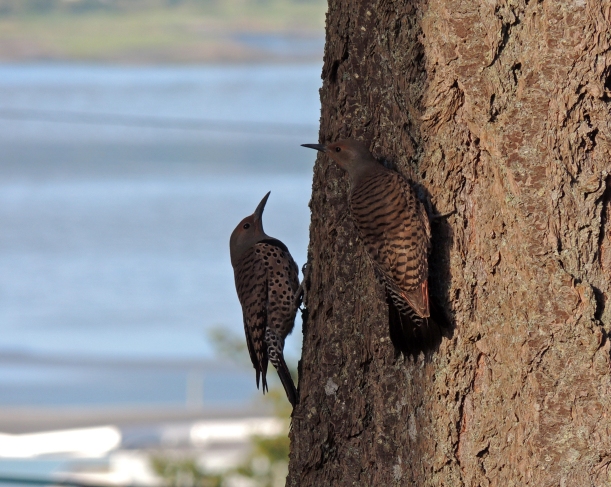 You got that? Look, I didn’t mean to frighten you, but we have to watch out for them at all times.

Okay, Mom.  Sheesh! It sure is a long way down!

Yikes! So it is! Keep looking up, Junior!

For at least a week I heard this red-shafted flicker pecking at something. I thought he must have found his favourite fir tree. Finally, camera in hand, I went looking for him and zeroed in on the sound. Here is where I found him, on the wall of an empty house.  I zoomed in from afar to see what he was up to.  It seems that the siding of a house was more appealing to him than any of the many trees surrounding it. Why is  he so determined to peck through this siding? Apparently he prefers the density of cedar to fir but flickers don’t eat wood, so he must be after something else.

If you look closely to his left, you can see a patch from where he made a hole last year. Above and below him also on the left are patched places where he had picked at the edges of the wood.  There must be something very tasty inside those walls. Maybe a delicious lunch awaits him.

Sometimes it takes only a simple thing to feel like you’ve just had a shot of Vitamin B12.

Yesterday I sat on a bench looking at this scene. I took a picture and thought, “Somewhere over there is my house. If I didn’t know there was a river on the far side of this mud flat, I might try walking across Comox Bay.” When I got home and uploaded the photo, I zoomed in and could almost see my house. I could see the workshop in the backyard and the tree that is in the farthest corner of the yard. I drew an arrow in the photo to show where that tree is, right in a gap between the treed area.

Having a sandwich and a chinwag with a friend was a simple way to pass some time but it was great medicine after not seeing friends for a long time, and not having much of a social life except for calling to people at a distance. We sat on opposite ends of a bench and caught up on news of the past weeks. Then we both went home refreshed, having had a change of scene.

I realized then how much I had missed seeing my friends, and how much I still miss seeing some who can’t get out for a while like I did.

The effects of the pandemic are the same for all of us in some ways, but different for others.  What changes do you find most difficult at this time? How do you cope?

I needed mulch to keep the weeds down between the shrubs in my yard.  A visit  to  the  local poleyard was in order.

The mulch is the chipped up bark of the mostly firs that are peeled to make nice smooth telephone poles.

All the peelings are sorted into mountains. Some are long strands of bark mulch, some are smaller chips of bark, and some are just ratty, junky pieces that aren’t good for much.

My garden needed the smaller chips so we parked the truck and utility trailer at the side of the road between the mulch mountains and waited for the loader to come and help us out.

Here he comes with his scoop in front.

One of those big scoops holds what they call a yard of mulch (we pay by the yard).

I’m always amazed at how little they drop on the way to the trailer.

Here comes our one yard of bark mulch.

When he drops it into the trailer and pats it down with the scoop, the truck shakes like in an earthquake.

It doesn’t seem like a lot until you start unloading it.

While I was waiting for the loader to come, I took a couple of short video clips to show how they take the raw logs and put them into the machine that scores the bark and flips the logs around and around. The power is awe-inspiring. Have you ever tried to juggle a log that size? Look at how the blades cut into the bark without cutting up the wood.

In the second video, you can see the bark mulch shooting out the long pipe to be piled up into those bark mulch mountains. Not much is wasted.

Next time you see bark mulch around a pretty shrub, think about how that log bounced around as it was stripped of its coat. It’s a good thing I can’t talk to the trees or hear what they’re saying, but if I had to guess, I’d bet they’re calling to each other, “Anybody got a coat they can lend me?”

I found some grass with flavour grand,

Beside the tap and in the sand,

I nibbled it and loved the taste,

I could not let it go to waste,

But then I heard a vicious dog,

My eyes bugged out, I stared agog,

I tried to hide but then I thought,

This battle’s one that can’t be fought,

The dog has biting teeth and jaws,

I sure don’t want to give her cause

I’d rather run away from her.

I’ll come back later, in the night,

When she is sleeping curled up tight.

And then I’ll munch and lunch till dawn

Cause I am safe while sun is gone.

But, oh, what is that hooting sound?

I think I’d best not stick around.

I hadn’t thought of these beautiful flowers as wolf plants, but the Collins Dictionary definition asserts that the word is 14th century in origin, from the Latin lupīnus, “wolfish,” as it was believed that the plant ravenously exhausted the soil (info from Wikipedia).

Seemingly contradictory is this edited quote, also from Wikipedia: Like other legumes, they are nitrogen fixing plants. This adaptation allows lupins to be tolerant of infertile soils and capable of pioneering change in barren and poor-quality soils.

My sister took these pics in her backyard. What a feast for the eyes.

I had no idea that the seeds of lupines are eaten in many parts of the world. However, when I read on, and learned about bitter tastes and that the seeds were often soaked and toasted or boiled and dried, I thought — too much work — I would probably enjoy them more just as a flower to be admired.

With all the restrictions and isolation due to Covid-19 rules, is it any wonder my friend Iris is flagging?

She and those in her bubble have been keeping their distance from others–in fact, firmly rooted as they are, they haven’t been able to move from their living space except for a few wild waves at the wind going by.