At first glance the beach looks somewhat empty of life, but if you take the time to look closer, you can see that it is like a giant grocery store filled with millions of small morsels of seafood. 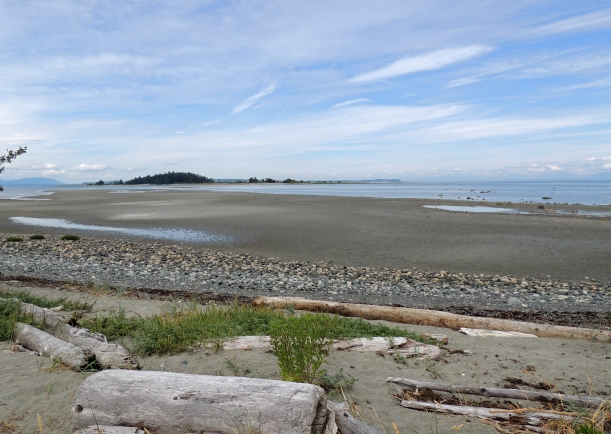 If you’re not hungry, just go for a walk. 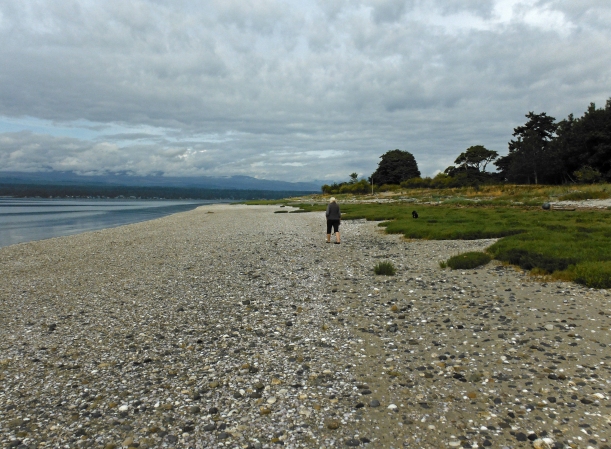 Tiny butter clams make a good snack later on. Be sure you have your saltwater licence though.

Here is one of the millions of clams that make such a delicious appetizer. 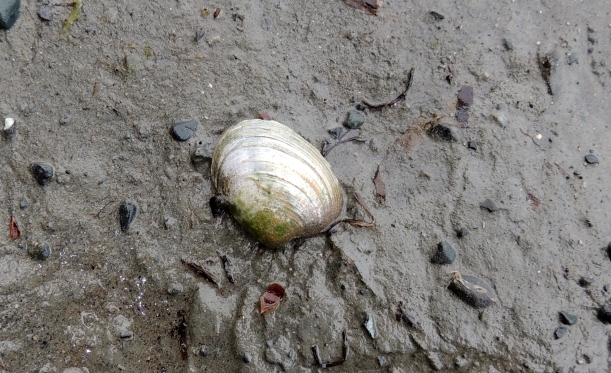 Steamed in a pot, the clamshells open and the little clams inside are ready to eat. Melted butter and lime juice adds a wonderful flavour, or if you prefer, you can eat them with garlic butter. 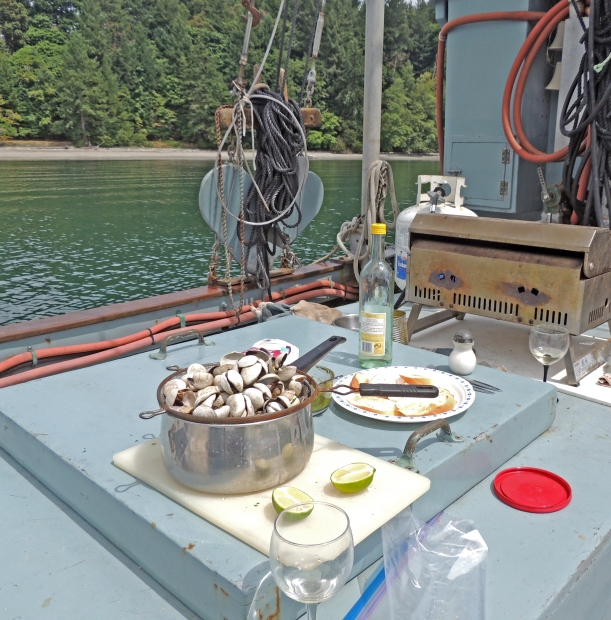 Oysters are also there for the picking, but be sure to shuck them on the spot so the shells with the bits of oyster are left behind to ensure their reproduction. And before you ask, NO, I don’t know how oysters make love. They seem to have “clammed up” and won’t talk about it.

I wanted to show you the water lily, but I ended up studying the photo and seeing all kinds of crazy things.

I’m in the boat (you see the edge of the aluminium skiff at the bottom of the photo), and over the water. The lily is over, on, under, and above the water.  But what is that big hill doing, hanging upside down from the top of the photo?

Once I started looking at the way the lily was growing, I was quite fascinated by the roots on the lake floor, the stems reaching for the surface of the water (some unsuccessfully, so far), and the leaves floating on the surface, some of them half sunk, others lifting up, yet others lying flat on the bottom of the lake.

And then there are the two flowers that are really only one plus a reflection.

The longer I looked the more I could see.

And to think that at first glance I thought it was just a boring weed in bloom.

No, I didn’t quilt these placemats underwater, but I felt like I was drowning in my work at times. Here are two finished and six not finished placemats I worked on while at the quilting retreat.

I wanted to make up the scenes as I went along, so no two placemats are the same. (The one below is finished except for the binding.)

However, you may notice a reappearance of the dark invader, my Darth Vader fish, in several of the placemats. His job is to see that you don’t eat too much at one sitting.

Miss Prissy Fishy below lets the others know that she has special protection from Darky. Who knows what favours she supplies?

So Darky concentrates on other unearthly looking fish for his supper.

And yet, he must wonder why he has no friends. Look at them scramble to get away.

“Miss Prissy Fishy,” says Pretty Boy, “why are you ignoring me?  See how talented I am. I can touch my toes. And anyway, don’t you know that good things come in small packages?”

“I heard that, Pretty Boy,” bubbles Darky, “but in the case of eat or be eaten, just remember that size matters. Oh dear, now look what I’ve done. I’ve upset Little Blue Wonderfish.”

Disclaimer via Darky: Not responsible for any fish swimming upside down.

We try to get out to Montana every year in October for some bird hunting and photography and hiking. This year, we arrived to about an inch of snow. While it is beautiful, it is quite chilly. The good thing about it is that rattlesnakes don’t like cold weather so I didn’t have to worry as much about Emma and Ruby getting bitten. 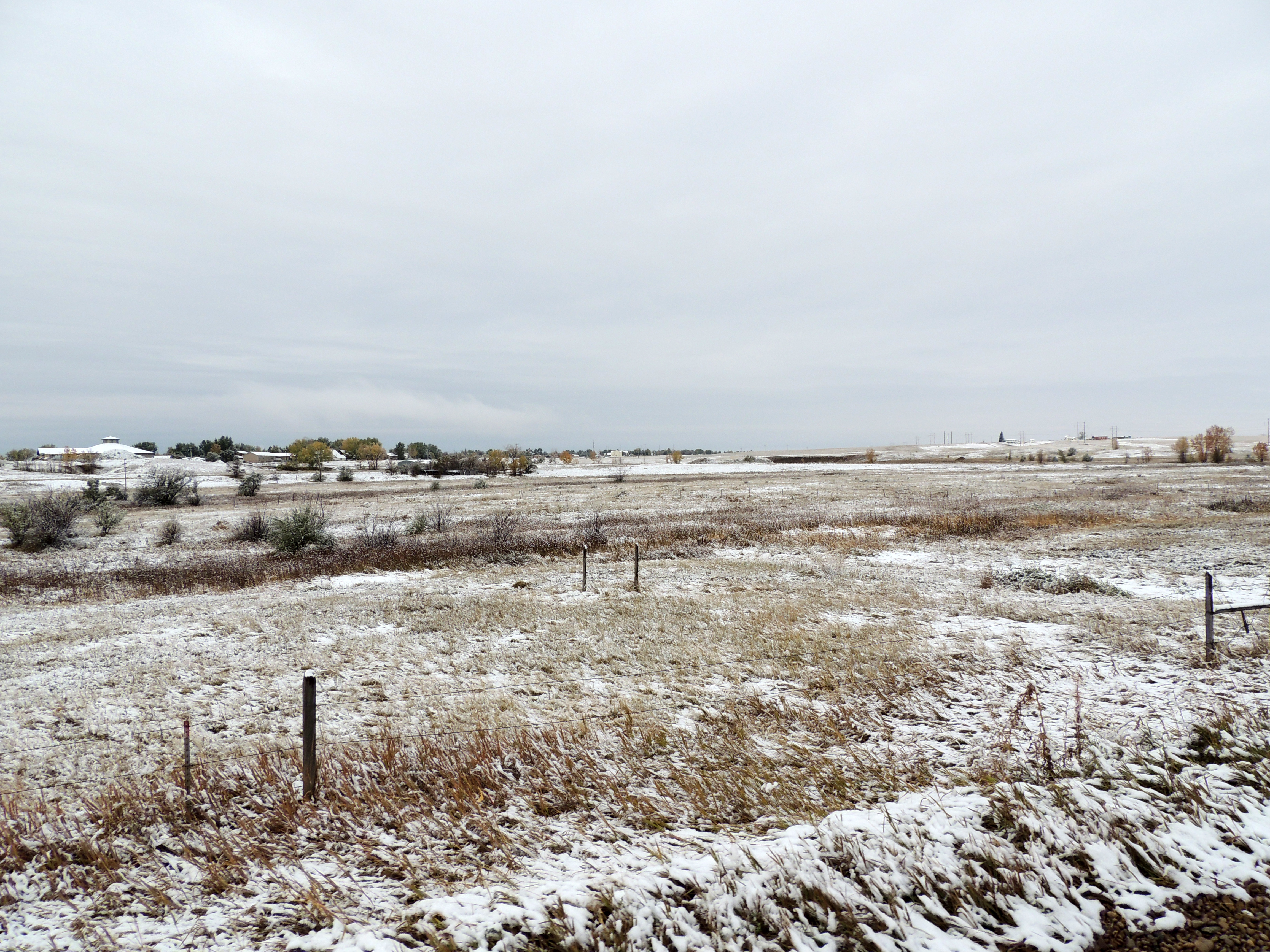 You may remember Emma as a puppy four years ago. We had great hopes that she would someday become a good flusher and retriever of game birds.

She hasn’t disappointed us. In spite of being quite small, this English field cocker spaniel is full of energy and her cuddly nature takes a back seat when it comes to finding birds. Nothing gets away from her.

If you thought the prairies were only boring grassy fields, you couldn’t be more wrong. The coulees are full of prickly shrubs, birds, and small animals. A fat hare came tearing out of the shrubs here and just as I was about to snap a photo, my battery died.

But later I caught this mule deer running away from all the commotion. I traipsed along behind the Captain and Emma as they did their pheasant hunting thing, hoping for something interesting to photograph, and I saw something the deer had left behind last year — an antler shed. It was only the second time I had ever found one and I was quite happy about stumbling across it.

After the snow from the day before, the mostly clay ground was “wettish,” and while we had heavy clods of mud on our boots, Emma’s feet were getting harder and harder for her to pick up. Besides collecting many burrs in her fur, she had huge clumps of clay on her feet. Here she is getting them soaked off, just before I took the comb and scissors to her curly ears to remove the burrs.

She is usually so energetic, we weren’t sure this was our Emma flaked out on the couch after the day’s outing.

It was Ruby’s turn to go out today, but she is sick. We think she drank some bad water. This has happened one other year and we have given her some meds that we hope will fix her up in a day or two.

PS Now, two days later, Ruby is feeling much better. We are so relieved.

This morning the dogs let me sleep in until about 6:00. Then Emma tapped the edge of the bed. Bleary-eyed, I let her and Ruby out and wandered around the yard waiting for them to do their business. They were more interested in what might have spent the night in the shrubs by an old tree stump. Maybe a rabbit or a raccoon? I wandered away a few feet and what I saw made me run back into the house to get the camera.

I didn’t care that the ugliest hydro pole in the world was front and center of my photo. I just wanted to record that rainbow.

The first rays of morning light were doing strange things. The hedge around our place is usually all the same colour, but when the light hit patches of it, you would think it had two kinds of trees.

These are all western red cedars with no colour variation (except today).

When the sun went behind a cloud only moments later, the sky turned dark and so did the hedge. You are looking at the same stretch of hedging in the photo below as in the photos above.

The cloud hiding the sun moved on and the morning rays went to work again.

It was a real light show out there this morning. I’m so glad I didn’t sleep through it.