I went to the wharf to make sure the boat had weathered the weather. It is tougher than I am, withstanding the first system of wind and rain that marks the end of this summer. 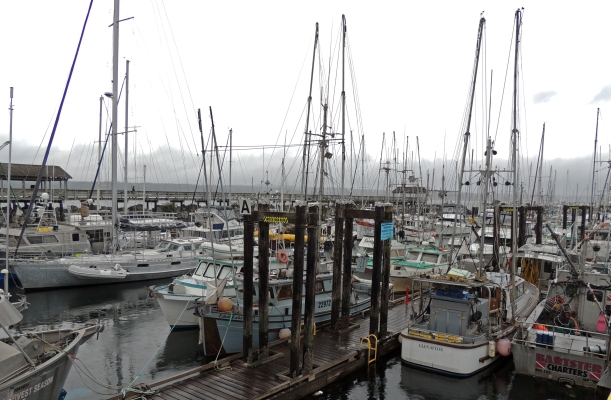 On the way home I took a small detour to dash out onto the beach for a photo. After many wipes of the lens I got a couple of wettish pics to show what kind of day it is.

Thoroughly dampened, I drove home, but couldn’t resist taking a picture of this very old house on the way. Too bad the upper windows and the skylight are a modern style. They don’t quite go with the rockwork, but it’s still a unique house. Not just the huge chimneys, but even the walls are made of rock. 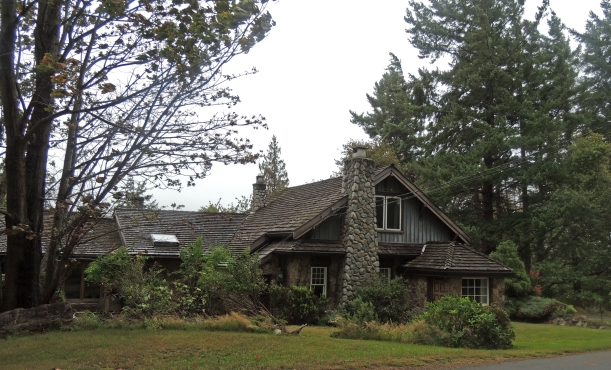 As I pulled into my own driveway a few minutes later, I saw a pretty, bittersweet sight — a maple leaf landed on my car, marking the end of summer and proving once again that, contrary to the old Canadian motto, the maple leaf is not forever.

But it will come again in the spring.

Vancouver Island is surrounded by many other smaller islands. It’s an easy boat ride to go for an overnight picnic on one of them. With our troller and the sporty boat of our friends, we did just that. Here we are snuggled up together. 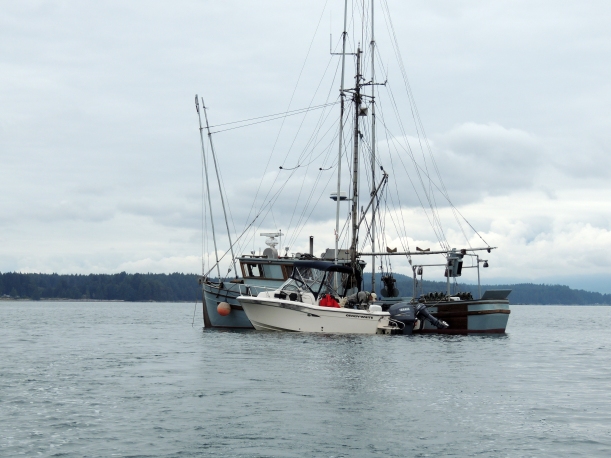 The aluminum skiff is handy for ferrying us to shore for some exploring and picture taking.

So many plants and shells are different from those on most beaches of Vancouver Island.

Our friends’ dog may have been a bit nervous at first, but he proved to have sailor’s blood running in his veins. He had a great time and was as good as gold. 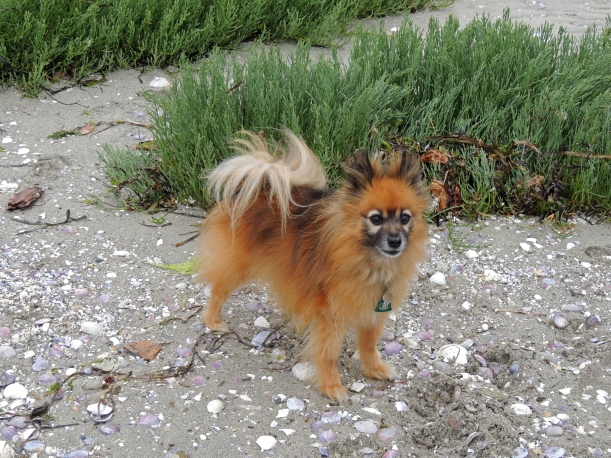 Dogs and people all got along fabulously and had a good time.

More on this outing next time.

*** Again – a reminder that all my novels are half price until the end of July. The Wind Weeps remains FREE. See my webpage for more info: www.anneli-purchase.com

Every year when the captain (my captain, that is) takes his commercial troller from Vancouver Island to the Queen Charlotte Islands on the northern coast of British Columbia (and back again), he has to go through a tight passage called Seymour Narrows. 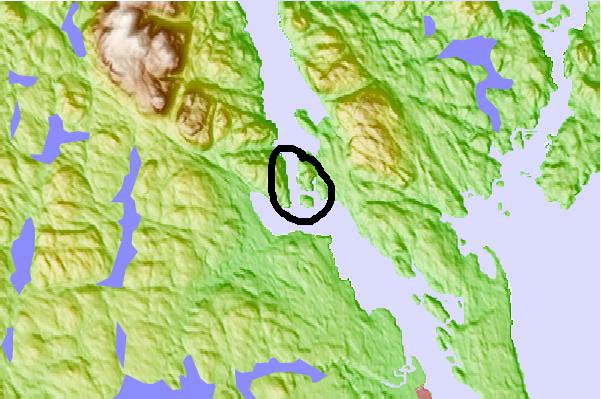 Located just north of the town of Campbell River, this stretch of water was described by Captain George Vancouver as “one of the vilest stretches of water in the world.” 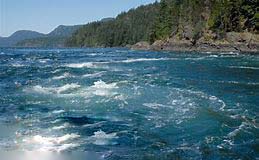 Whenever I have accompanied “my” captain through the narrows, I’ve nearly given myself an ulcer beforehand, as Seymour Narrows has such a terrible reputation. Yet each time, going through the passage has been a piece of cake, with calm waters. That’s how it should be, if you wait for slack water, between tides.

The passage through Seymour Narrows is now much safer thanks to the removal of the tops of Ripple Rock,  a submerged twin-peak mountain that lay just nine feet beneath the surface of Seymour Narrows. According to Wikipedia, it was a serious hazard to shipping, sinking 119 vessels and taking 114 lives.

In the case of the William J. Stewart, when it struck Ripple Rock  in 1944, I’m not aware of any loss of life, and the ship was beached and later restored. It was due to be scrapped in 2017.

On April 5, 1958, after twenty-seven months of tunnelling and engineering work, Ripple Rock was blown up with 1,375 tons of Nitramex 2H explosive. It was quite the project.  A 500-foot vertical shaft was built on Maud Island, and then a horizontal shaft of 2,370 feet  was drilled out to Ripple Rock. From that point, two vertical shafts were drilled up into the  peaks, with shafts for the placement of the explosives. Very advanced technology for 1958. 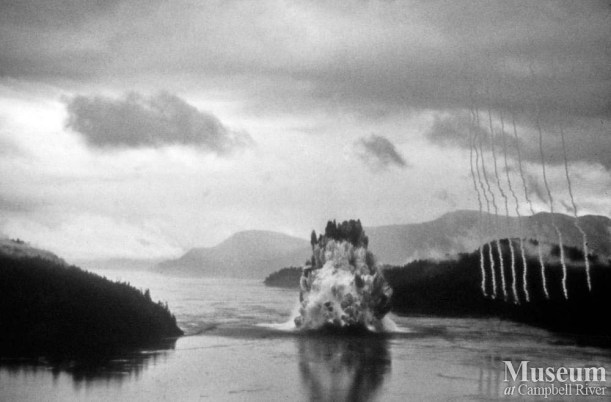 I think those columns of smoke are blowback  from the explosion, coming out through the drilled shafts.

Some very smart engineers had the foresight to detonate the charge at a time when the tide was running its fastest, so the rocks  blown off the tops would not fall straight back down onto the peaks, but rather, be swished along beyond them.

Even after the top of Ripple Rock was removed, it remains a challenging route. In March 1981, the Star Philippine, a freighter, ran aground in the narrows.

When the captain was coming home from a summer of trolling, he took pictures of his navigation instruments as he went through Seymour Narrows quite close by Ripple Rock. The red triangular icon represents his boat as he is heading south, just past Ripple Rock. Arrows show the direction of the tidal flow at that time. You can see the depths of the peaks as 15.2 m, and 13.7 m. 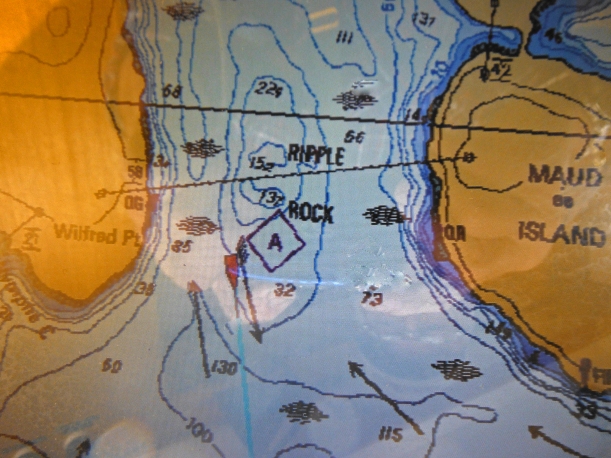 In the monitor of the depth sounder below, you can see the twin peaks of the rock. The reading is taken on the far right where the scale is marked. This tells me that the boat has just passed the second of the peaks of what is left of Ripple Rock.

Even knowing that the rock has been topped, I still have a healthy respect for this stretch of water. The colour photos (near the beginning of this post) of the swirling eddies are recent, well after the explosion of Ripple Rock, so you can see that going through Seymour Narrows when the tide is running full is still not a good idea.

My preference is to stay on land whenever possible.

At first glance you might think it’s a sandy beach, but your nostrils will tell you that iodine  breeze holds the smell of low tide.  That sand would be very soft to walk on and I wouldn’t advise it. When the tide comes in, all that “sand” will be under water. Meanwhile, there’s no telling how far you would sink into that sea bottom.

This is the east side of the causeway that divides the wharves where fish boats can tie up. It is what they call the new side, more recently dredged to provide more moorage and shelter for local boats.

The older side is more crowded because “the old salts” tie up there. It is busy with fishermen getting their boats ready for a summer of salmon and halibut fishing, often far enough from home that the men and their boats may be gone for many weeks.

You can see the roof and the rigging of the Captain’s boat on the bottom right-hand side of the photo below.

The new side is also busy, but is more convenient for boats that come and go more frequently.

Those who have fish for sale will want to moor on the new side. It is handier for the public to visit for dockside sales of whatever is in season. It might be prawns, shrimp, salmon, halibut  or other. Today it is halibut. The customers lined up on the dock know that they have to buy the whole fish. The price is high, but they gladly part with well over $100 for a small halibut. These flat fish have a delicate white meat which, though highly priced, is also highly prized. If you could see what the fishermen have to risk and endure to catch and bring these fish to harbour, you would say the price is a bargain for the customer.

As you can see, there is no shortage of people wanting fish for their supper.

I have removed the name and number of the boat to allow some anonymity for the boat owner.

When the herring roe fishery happens each spring on the BC Coast, the seine boats and herring skiffs congregate close to shore because that is where the herring can be intercepted as they rush the beach to spawn. At night when the boats have their anchor lights on, it looks like a floating city just offshore.

Sea lions and seagulls and eagles patrol the area in hope of some tasty bites.

It’s a bluebird day. Hard to believe it was rough and windy just a couple of days ago. Still it was fishable and the herring filled the seine nets. Then disaster struck as an extra heavy net caused a boat to list  and not recover. The fishing community lost a fellow fisherman. His brother is quoted on CTV News:

“They had a really big set. The boat was listing and Mel went down into the engine room to turn the pumps on, and while he was down there the boat rolled over.”

It brings home to all of us once again, how dangerous fishing is. While the fleet mourns the loss of one of their own, the fishery goes on, as it must. The pretty night lights, and the bluebird daytime sky and sea belie the sombre mood and the heavy hearts of the fishing fleet.