The cold snap has hit us. The suddenness of the bitter cold was a shock to us west coasters. We’re tough when it comes to wild winds and torrents of  rain, even crashing trees and power outages, but drop the mercury a tiny bit and most of us coasties are wimps. We don’t like the cold.

That wind is supposed to be southeast. Every day, every day, all through the winter, it’s southeast. What a shock when it switched to northwest. I swear I could smell polar bear fur in the wind.

Ruby, our 13-year-old springer spaniel has done some retrieving while duck hunting in the last couple of weeks, using joints and muscles she hasn’t used in a long time. Now, old age is catching up to her. She’s been having trouble with the stairs, not wanting to put weight on her left shoulder.

Just now she is soaking up the warmth of the tiles in front of the woodstove in our family room.

She does have a nice soft dog bed, but the tiles have been warmed by the fire and it’s just what her shoulder needs, while she dreams of duck hunts of the past. 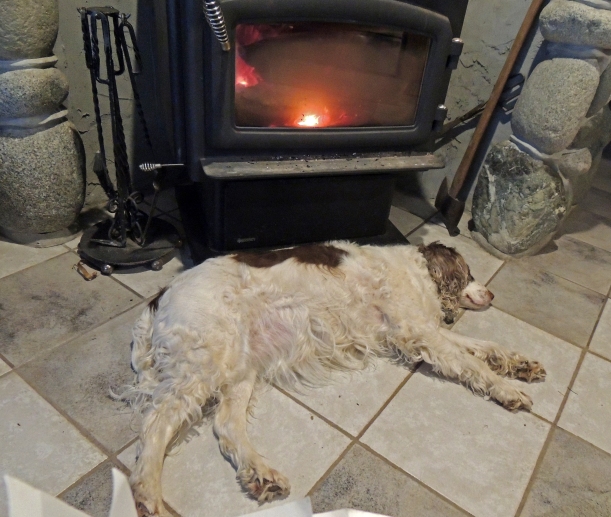 There comes a point when, no matter how badly you want something, you know that it’s wiser to give it up. Going ahead with our trip to eastern Montana, after negotiating three snowy weather systems in two short weeks, would have been pushing our luck.

So with high winds and snow still coming down on the way forward, and snow settling on the road behind us, we reluctantly turned homeward.

The tires had sat frozen and immobile for two bitter cold nights, so we eased ahead a few feet and held our breath. So far, so good. We could have cried, turning back, but it was a relief not to drive into more snow blowing sideways.

I could have cropped this photo so the antenna wouldn’t show, but the icy snow on the forward side of the antenna says something about the chilly air. 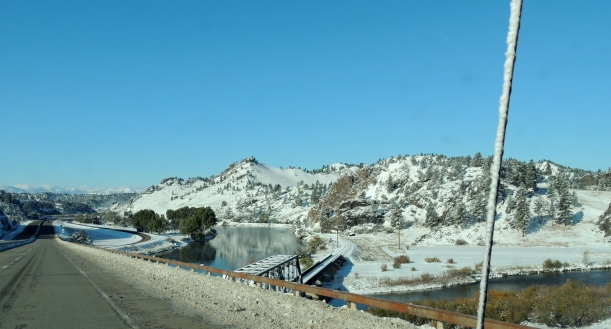 Here is one of the many views of the Clark Fork (one of my favourite rivers). It is visible flowing beside or under the highway off and on for many miles.

On our drive eastward, little snow covered these lower elevations. Now it made for scenic winter postcard material. In some areas, the water was warmer than the air, resulting in fog along the river.

You can tell where the river goes.

Snow had covered these hills that were bare when we had driven through a few days earlier.

Some snow was still on the roads. As the day warmed up, big transport trucks lost clumps of ice that had collected on them. In the stretch of road below, the eastbound lane is closed and the westbound lane is taking two-way traffic. You don’t want to catch an edge or a clump of ice. The one in the photo below is one of hundreds of clumps we had to avoid.

I wondered what these cattle were “grazing” on. Not much grass poking out from the snow. Winter is hard on many animals. 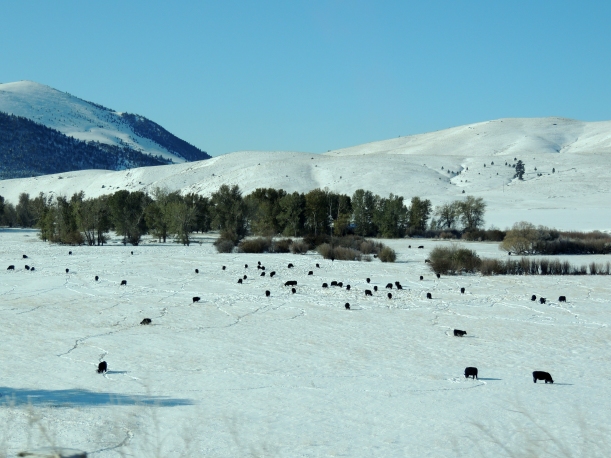 As we neared the upcoming MacDonald Pass, my knuckles gave the snow some competition for whiteness. I knew I had a good driver beside me, but with so much construction and lanes restricted by cones and ice (and I don’t mean ice cream cones), I was nervous all the way to the top of the pass. 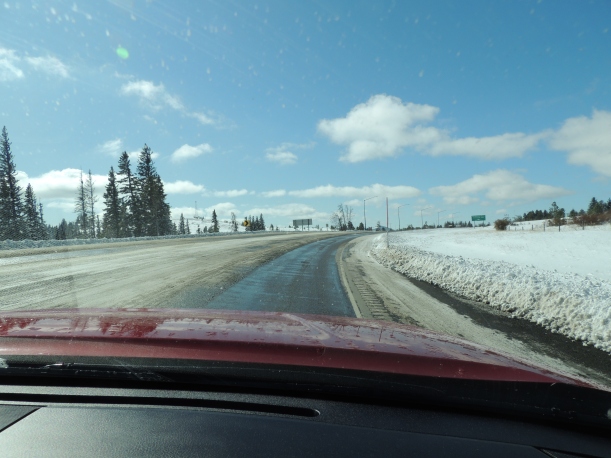 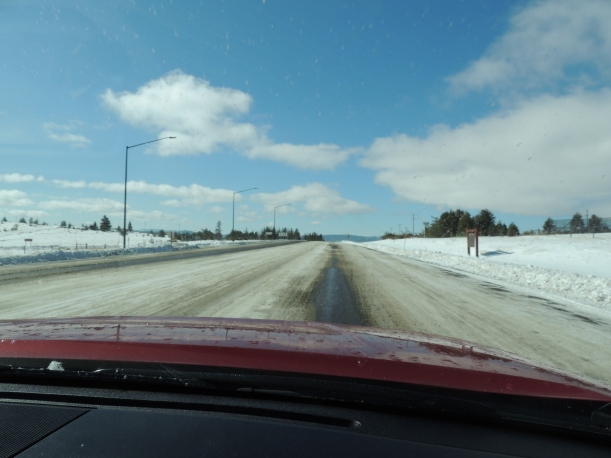 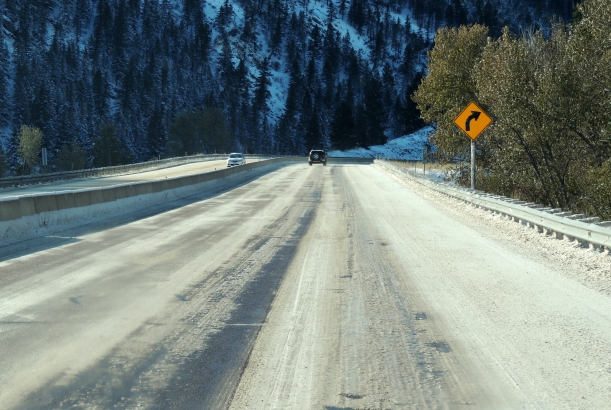 And relieved to be going down to a lower elevation right afterwards. Only two passes left to negotiate before we got home.