I found this odd plant growing along the side of my driveway this morning. It goes by several names: monotropa uniflora, ghost plant, ghost pipe, Indian pipe, and corpse plant.

It does look rather ghostly without its green chlorophyll, but  more striking than that is the shape. I’ve only ever known it as Indian pipe, probably named for its shape similar to the traditional Indian peace pipe.

I’ve always found the Indian pipe fascinating because it is so different from most other plants. I thought it was a fungus, like a mushroom, but apparently it is considered to be in the family of Ericae, the heathers. I can’t see the connection, but I trust Wikipedia to have given me the correct information.

But the Indian pipe is parasitic on fungi, deriving its energy from the root systems of fungi rather than from sunlight. It can pop up very quickly after a rain. We did have quite a downpour yesterday and here they are! 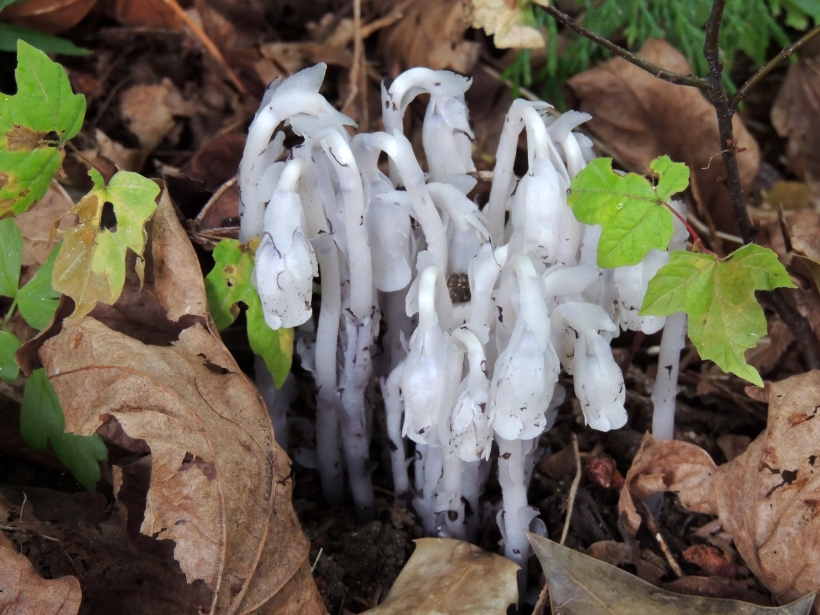 By the way, you might have noticed that it is surrounded by Canada’s symbol, the “maple leaf forever,” looking a bit ratty around the edges, and no wonder, the way things are going.