It’s that time of year when the leaves of squashes die and the squashes are lying around waiting to be picked. 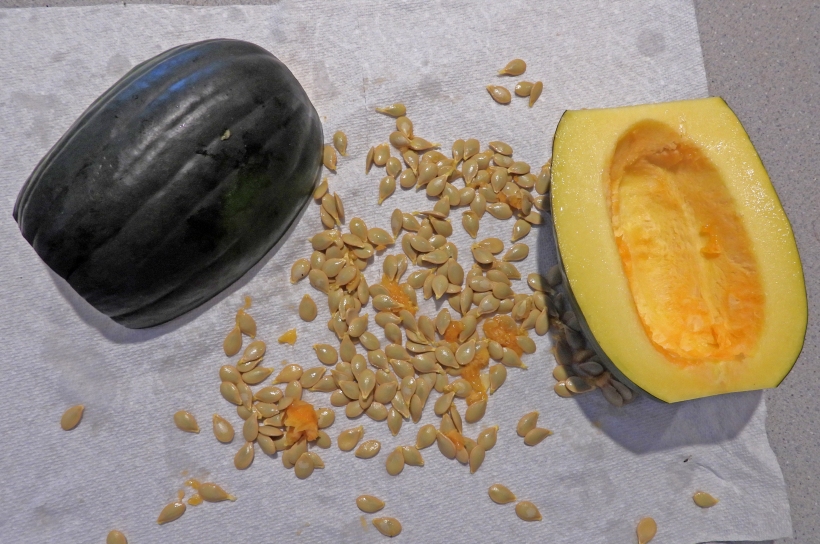 I think this one is called a green egg squash.

A friend gave us several varieties of squash last autumn  when he harvested his garden. They were so good that I decided to try growing some myself the next growing season. I saved the seeds of the gift squashes and planted them this spring.

It was time to harvest them and I saved the seeds of the second generation. Next spring I’ll plant those and hope to grow a third generation of these green egg squashes.

They are so tasty. I like to cook them two different ways. One way is to cut the squashes in half and peel them. Then I slice them into one-inch pieces that look like a crescent moon. I put all the pieces in the microwave for three or four minutes while I sautee some chopped onions in butter in a frying pan. Then I place the crescent-shaped pieces of squash in the pan with the onion bits and fry them to a golden brown colour.

The other way is more traditional. No peeling necessary, but I give the squash a good wash. Cut the squash in half lengthwise, clean the seeds out of the center, and cut each half crosswise.  Paint the inside surfaces with melted butter, sprinkle on salt and pepper, and bake at 350, peel side down, until the squash is tender. Depending on the size of the squash, it may take 45 minutes to an hour. I cover mine with tin foil for the first half hour. If they need more baking time, just keep the heat to them until they are tender.

I’m looking forward to planting the next generation of these squashes.

I have another kind of squash that a friend in Montana gave us in 2015. I saved those seeds and have kept them going year after year ever since. That was a buttercup squash. Here is a picture of one of its descendants.

Not only is it fun to watch continuing generations of plants growing, but saving seeds is a good habit to get into. You never know when we may have hard times ahead.