People are not the only ones who put on a pound or two over the holidays. It happens to our pets, too.
This morning the Captain took Emma, our field cocker spaniel, to a nearby farm to hunt for ducks. This photo is from yesterday, when we were just out for a walk. Ducks were everywhere.

Ruby, the springer spaniel, was upset that she didn’t get to go. Nearly 12 years old, she’s almost completely deaf now, but she still knew she was being left behind. She felt better after I gave her a little treat and pulled  her doggie bed right beside me by the laptop. 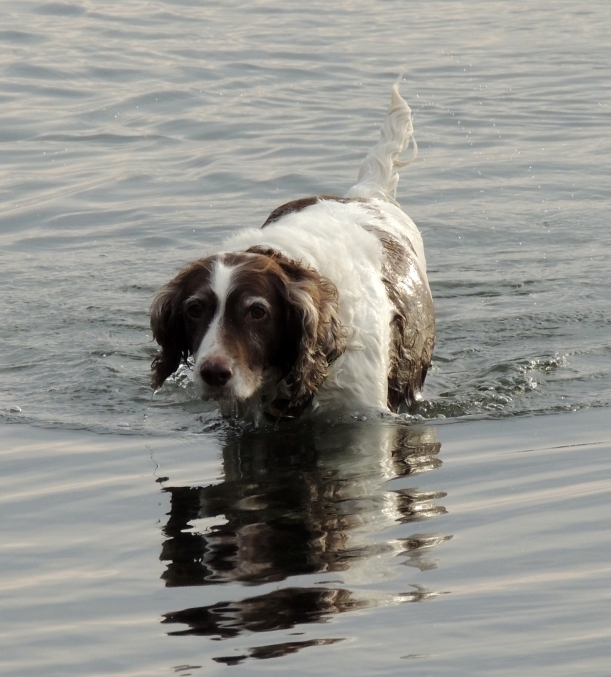 Last night when the Captain was getting things ready for this morning’s outing, he hauled out the little neoprene vest I made for Emma a couple of years ago.
“You’d better try it on her,” I said. “She’s put on a couple of pounds.” (After all, it’s just after Christmas).
Sure enough, it was VERY snug.
“You can’t have her wear that. She won’t be able to breathe.”
I looked high and low and luckily found a piece of left over neoprene  (from the old wet suit that I had used to make the vest).
I cut a 1 1/2 inch strip the length of Emma’s suit. It didn’t take long to cut the suit and sew in the strip. With a zigzag stitch and the piece butted up to the edges it was easy to insert a strip. No need to overlap neoprene to make a seam. Just laying the edges snugly side by side and zigzagging them together works fine.
You can see the post I did about the original vest a couple of years
ago. https://wordsfromanneli.com/2016/11/11/dog-vest/ 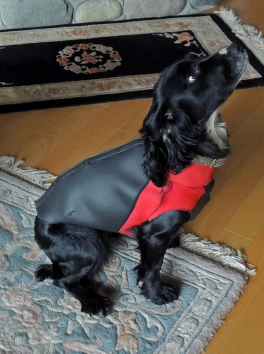 Here she is in the original vest.
I was going to take a picture of Emma in her expanded vest to put at the end of this post, but I was shocked to learn that she came home without it.
It’s lost! Somewhere out there in the brambles it got hooked up, the velcro parted, and there the vest stayed.
In the next day or so we’ll have to launch a search party for it.

We try to get out to Montana every year in October for some bird hunting and photography and hiking. This year, we arrived to about an inch of snow. While it is beautiful, it is quite chilly. The good thing about it is that rattlesnakes don’t like cold weather so I didn’t have to worry as much about Emma and Ruby getting bitten.

You may remember Emma as a puppy four years ago. We had great hopes that she would someday become a good flusher and retriever of game birds.

She hasn’t disappointed us. In spite of being quite small, this English field cocker spaniel is full of energy and her cuddly nature takes a back seat when it comes to finding birds. Nothing gets away from her.

If you thought the prairies were only boring grassy fields, you couldn’t be more wrong. The coulees are full of prickly shrubs, birds, and small animals. A fat hare came tearing out of the shrubs here and just as I was about to snap a photo, my battery died.

But later I caught this mule deer running away from all the commotion. I traipsed along behind the Captain and Emma as they did their pheasant hunting thing, hoping for something interesting to photograph, and I saw something the deer had left behind last year — an antler shed. It was only the second time I had ever found one and I was quite happy about stumbling across it.

After the snow from the day before, the mostly clay ground was “wettish,” and while we had heavy clods of mud on our boots, Emma’s feet were getting harder and harder for her to pick up. Besides collecting many burrs in her fur, she had huge clumps of clay on her feet. Here she is getting them soaked off, just before I took the comb and scissors to her curly ears to remove the burrs.

She is usually so energetic, we weren’t sure this was our Emma flaked out on the couch after the day’s outing.

It was Ruby’s turn to go out today, but she is sick. We think she drank some bad water. This has happened one other year and we have given her some meds that we hope will fix her up in a day or two.

PS Now, two days later, Ruby is feeling much better. We are so relieved.

What is it with camo-gear? Isn’t it for disguise?

Every once in a while I see children (and sometimes adults) wearing camouflage clothing around town and I have to wonder what they’re hiding from?

Animals have natural camouflage, traits that have evolved  over thousands of years. I can understand that. Man copied the idea and used it during WWl. Okay, if we must have war, camo is smart.

To be properly camouflaged you have to try to blend in with the colours around you. Sand coloured khaki for the desert, dark blue or gray on rocky terrain. But by far the most popular style of camo-clothing is the kind with splotches of olive green, brown, and beige.

In the Vietnam war, camo-gear was everywhere and has been popular ever since. But has the marketing gone a bit too far? In many cases I have to wonder, what is the purpose of wearing or using camo-gear?

For civilians, there seems to be little reason to wear camouflage.

1)      hikers, who may want to hide so they can see more animals while out on a nature walk, and

2)      hunters, trying to hide from animals they are stalking.

But, for both hikers and hunters, the use of camo-gear can backfire.

Relatives of a lost hiker may report to Search and Rescue that their loved one was last seen wearing camo-clothing. Please search for a large cluster of leaves that isn’t one.

Hunters in camo have the same problem, but they have one advantage. With their excellent disguise, they may be mistaken for a game animal, so for safety, they often sport blaze orange sleeves on their camo-shirt or a bright orange brim on their camo-cap. Now they can be spotted easily if they get lost and at the same time, avoid being shot.

But wait! Am I missing something here? What was the point of wearing the camo-clothing in the first place?

Now we come to the rest of the camo-gear. We have all kinds of accessories in camouflage colours: backpack, flashlight, knife, shotgun case, shotgun stock, even the barrel in some cases.

Imagine the scenario: The hunter sets down his gear to take a break, to retie the laces of his camo-boots, or camo-runners, or to have a drink from that camo-flask of water he can’t find just now. He set it down here somewhere….

He checks his camo-watch, decides it’s getting late. He sets his shotgun down on the ground for safety while he climbs carefully over the barbed wire fence. He’ll just hunt this one last field and call it a day. Once on the other side, he adjusts his camo-pack and reaches for his gun. But where is it? Quick! There’s a bunch of pheasants getting up out of the tall grass. Where’s the damn gun? Too late, he finds it perfectly hidden, right in front of his eyes.

Tired out, he comes home at last after tromping incognito through miles of fields. He strips down to his underwear and crawls into bed for a quick late-afternoon nap. What’s this? Camo-underwear? Is he hoping his wife won’t find him in the bed and kick him out to have a shower first?

In the previous post I told about the newly named “three lame ducks,” the old duck hunters who brought the duck blind they built out to the field. At the time I didn’t have a photo of the blind in its location with the final touches to have it blend in a little. Here it is, ready for action. Probably it will need a stormier day to work better, but for now it can sit out here and get used to its new surroundings.