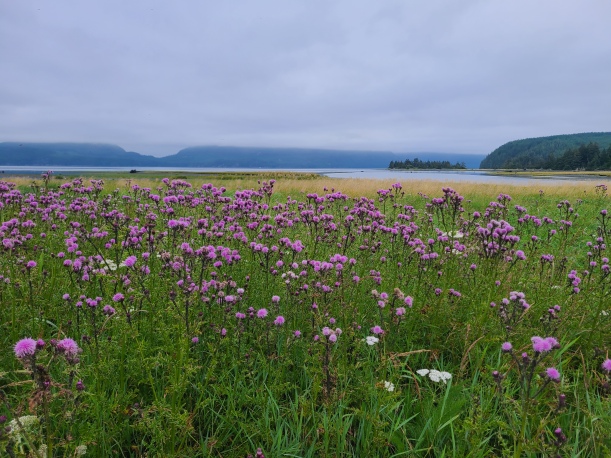 Look at this, it could be lunch,

If that guy can catch a bunch. 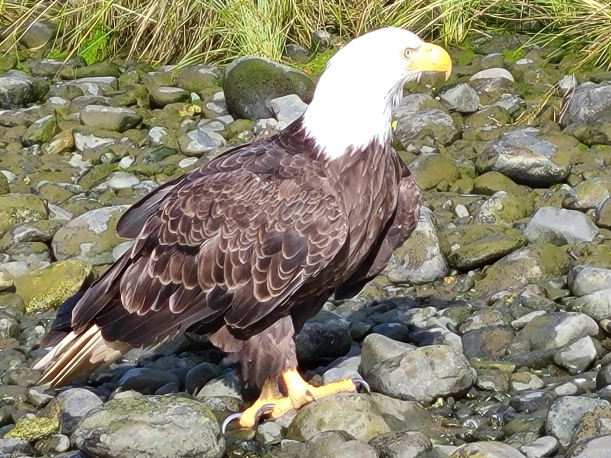 “How’s the fishing been today?” 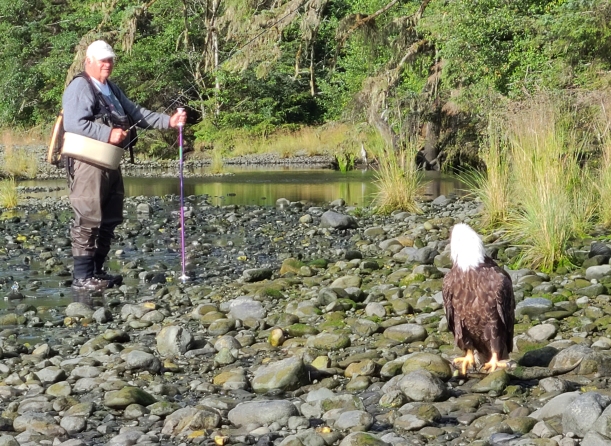 Does he know the pain I feel? 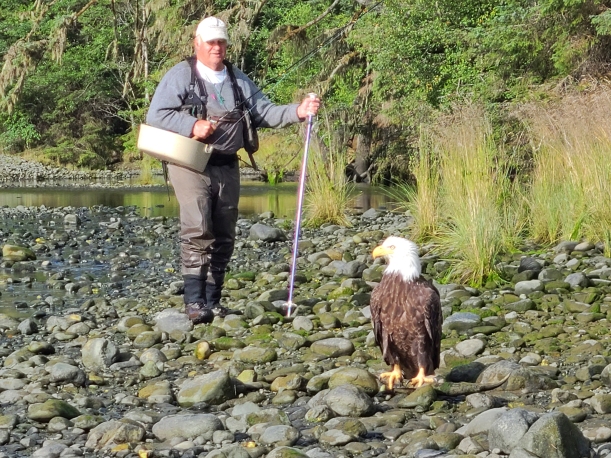 I was wanting lunch, you know!” 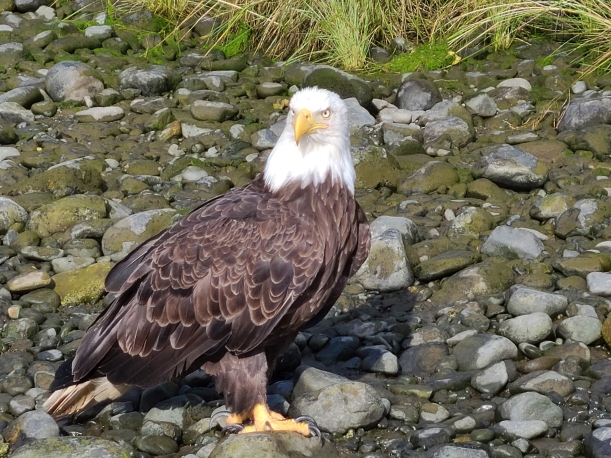 Try to find another near. 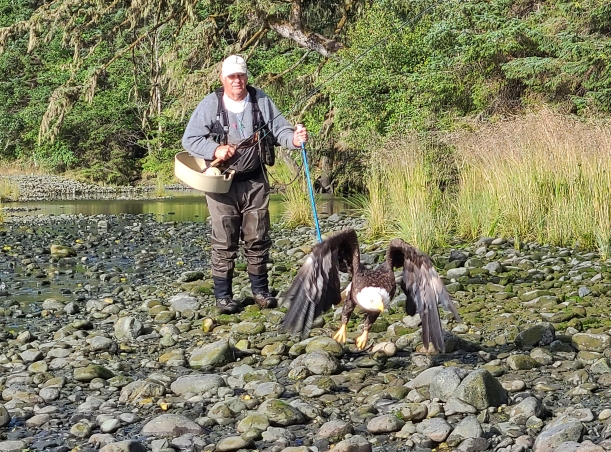 How I hope he’s catching more. 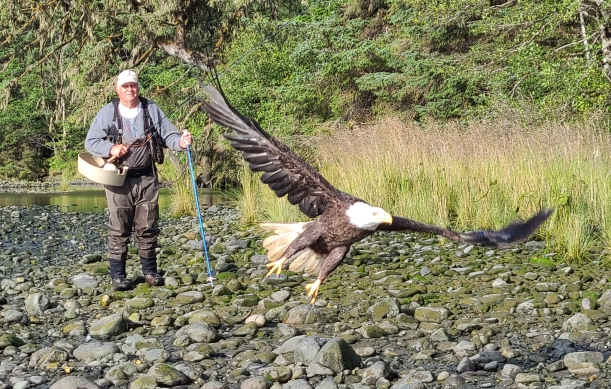 Fisherman goes back to work,

Hoping soon his line will jerk. 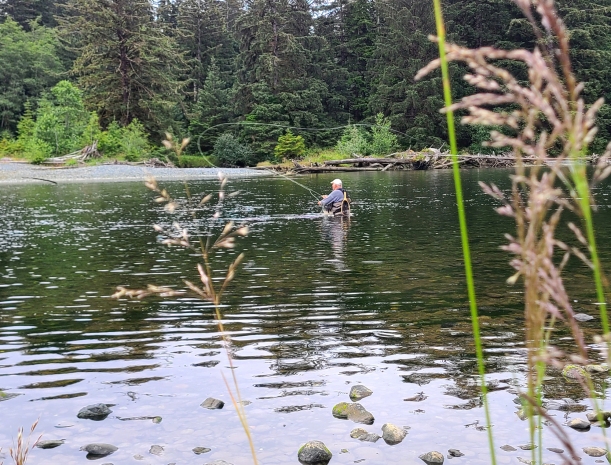 PS I forgot to say these photos were taken by a friend on his cell phone.

Then I zoomed in on it and got a close up of it, but had no place to steady the camera and just took my chances. 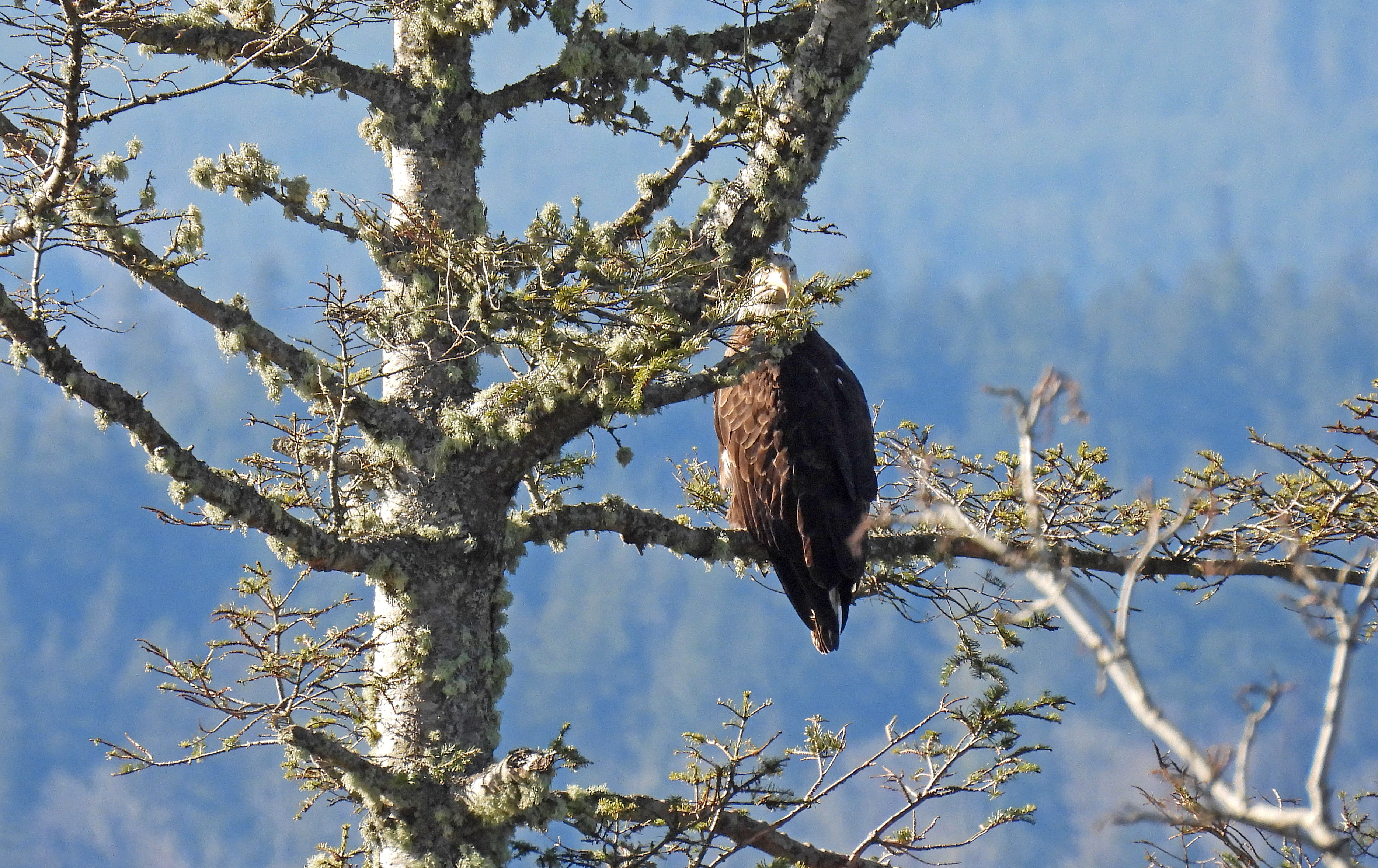 In a second closeup, I saw that he had his beak open and I could see its tongue, but I see that the photo is quite small on the blog, so if you want to see the eagle’s tongue, you’ll have to click on the photo to make it bigger. Even so, it will be hard to see. 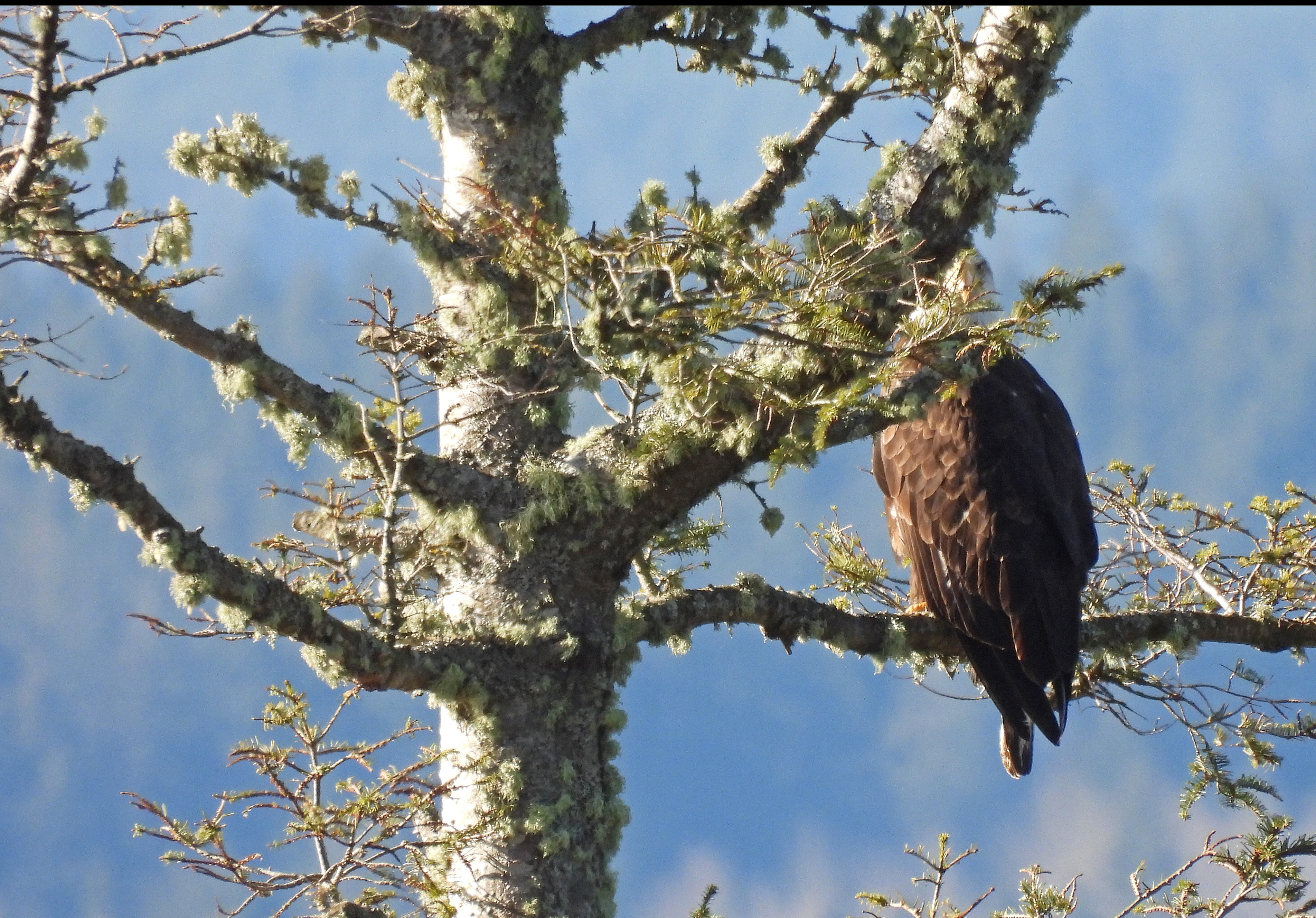 These birds are much bigger than they look. If you had one sitting beside you with its wings spread out, tip to tip those wings could span 8 feet. The bird might weigh about 14 lbs., the size of a small turkey.

Anyone walking a small dog or worse yet, letting it run around in their backyard in eagle territory, had better watch out for it. They make a nice snack. Although eagles are not water birds, they will do what they have to do to procure food. I have seen an eagle with a loon in its beak, dragging it across the surface of the water as the eagle swims with one wing paddling like a lifeguard saving a drowning person, until it got to shore where it cold devour the bird. I have seen it do the same after swooping down to pick up a coho salmon just below the surface of the water. They are incredibly strong birds.

At this time of year, the herring come close to shore to spawn. This means a bounty of food for the eagles. You can see these birds showing up in the tall trees near the beaches in greater numbers to await the arrival of the herring.

Eagles are not totally scavengers, but they are like a cleanup crew of a different kind. They are opportunists and will eat what is already dead, but they pick off sick or injured animals, whether they be land- or sea-birds, small mammals, or fish.  A crippled duck won’t suffer long with eagles around.

This is why you will often see eagles high up in a tree. They observe a large area, watching for stragglers in a flock of birds, or any weakness in animals small enough for them to pick up. 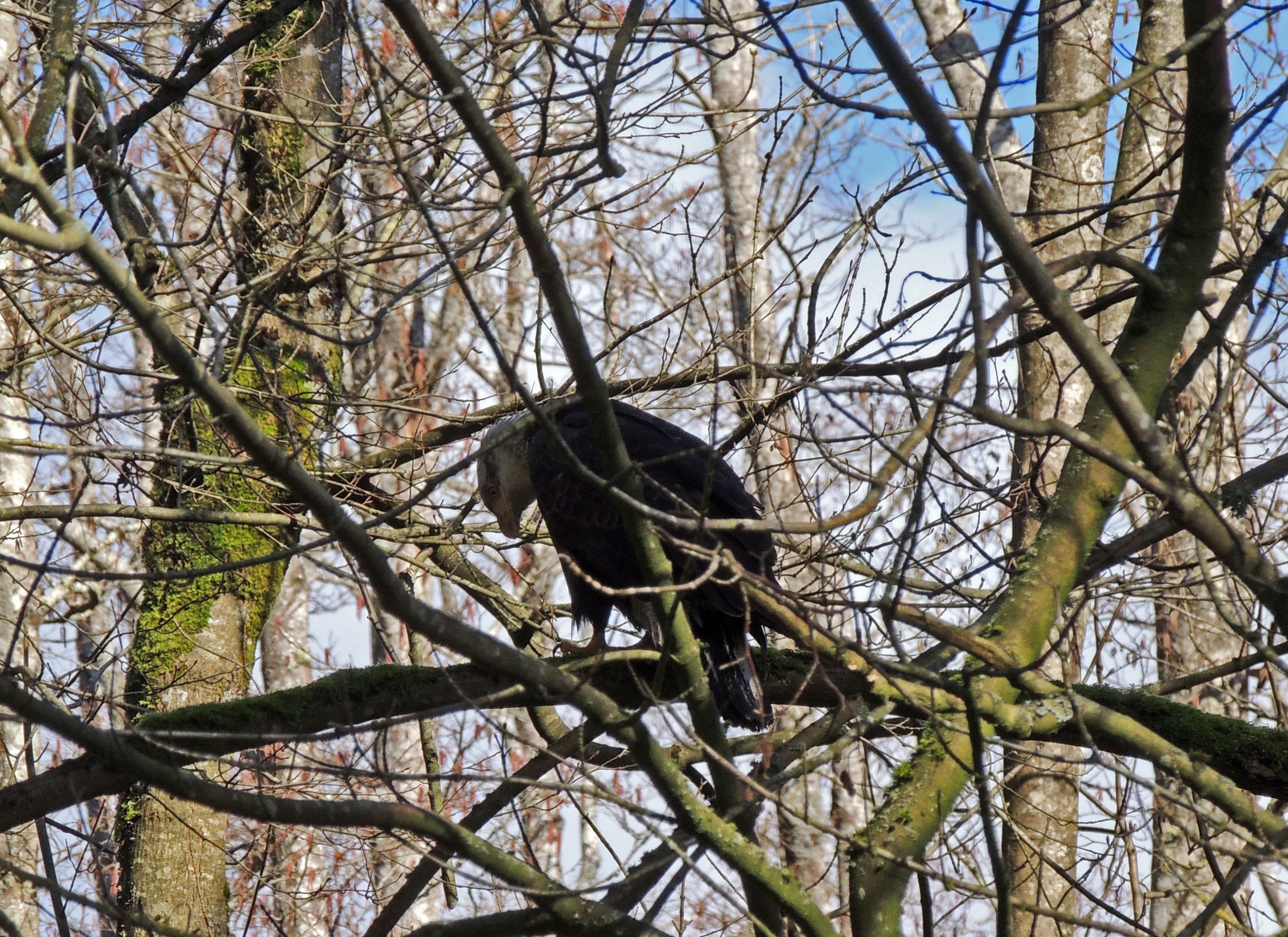 This raccoon may have been sick, injured, or dead, and became an eagle’s meal. 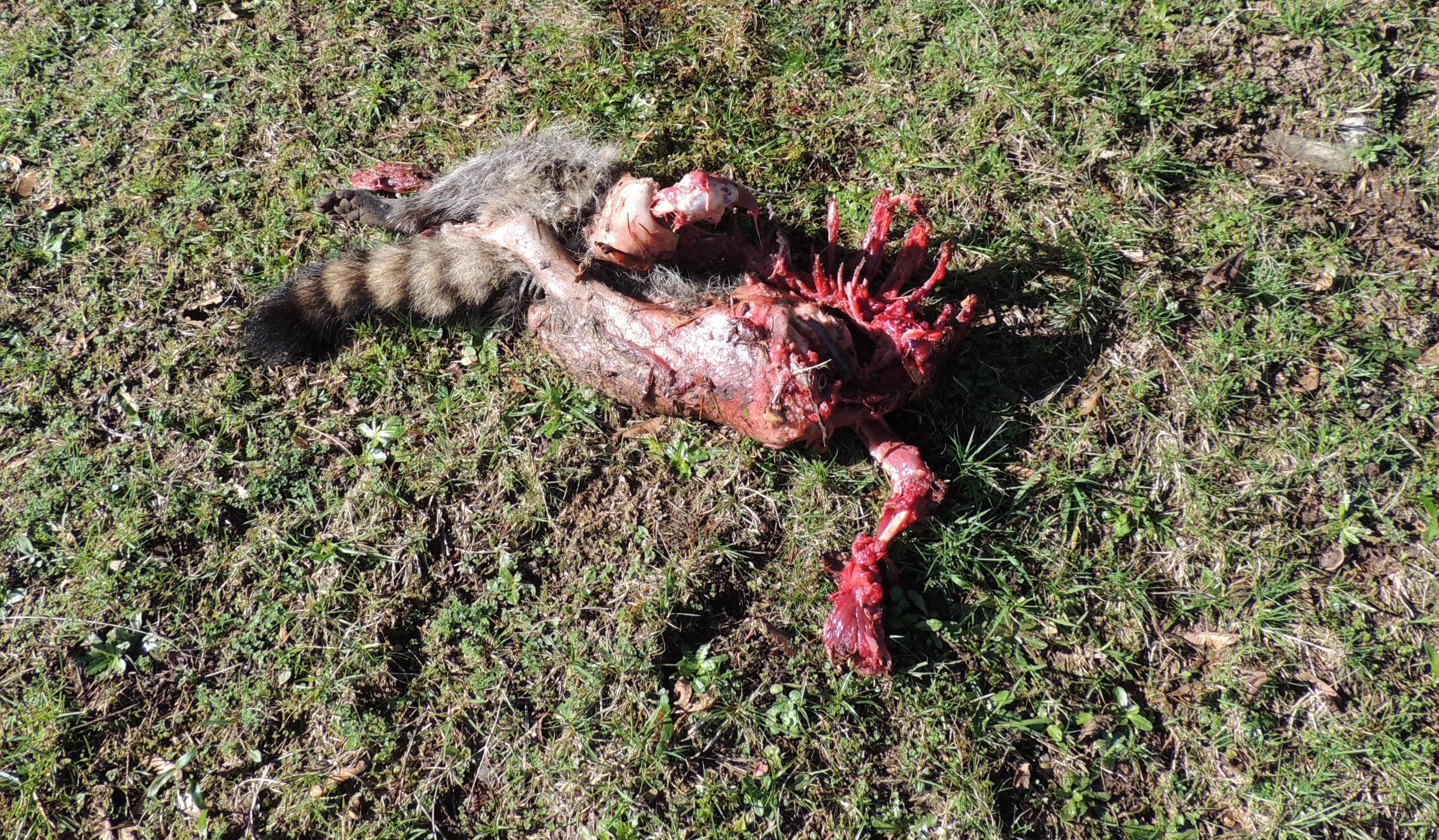 “Hmm…. There must be a little morsel left.” 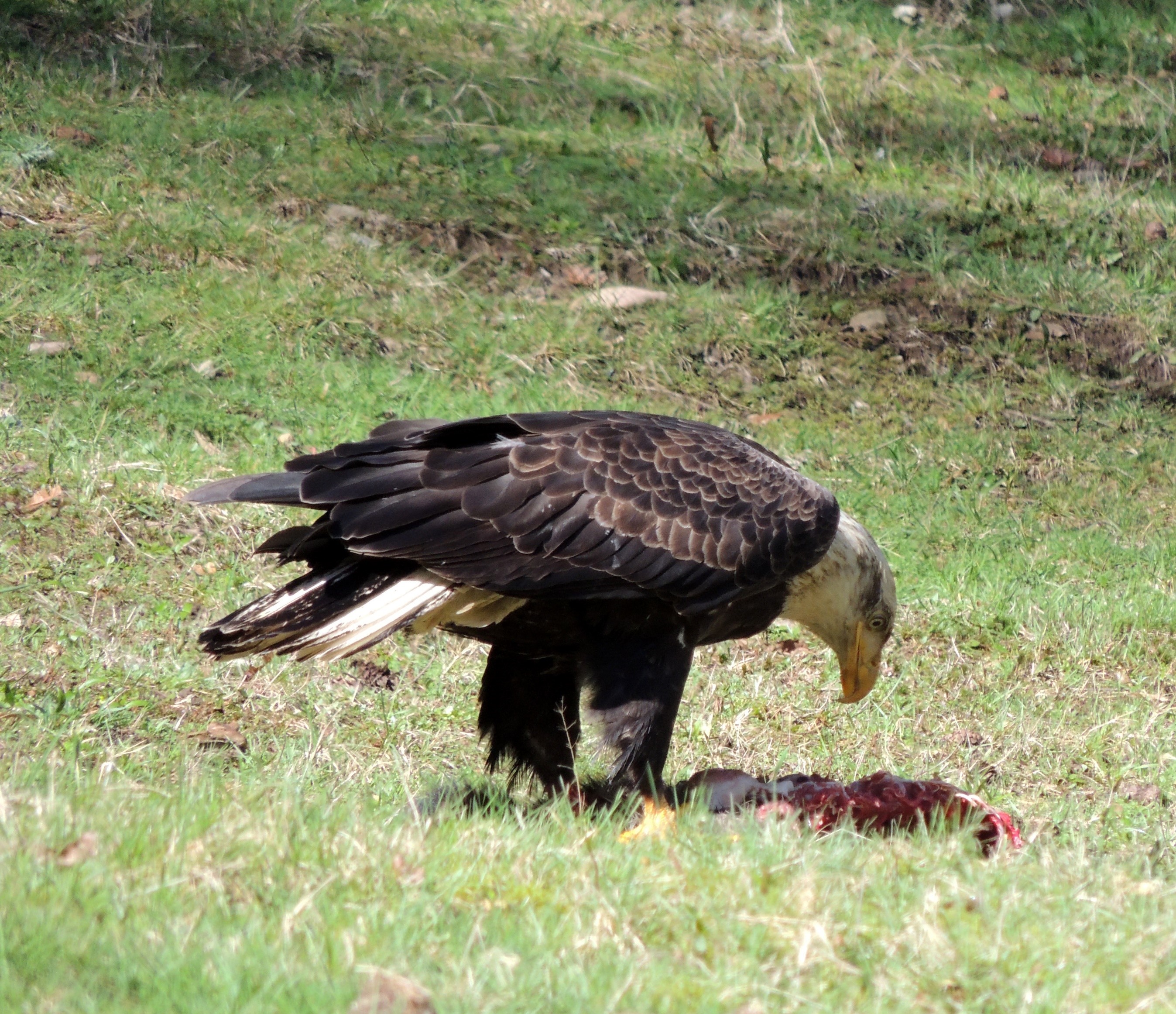 “He’s messed up my nice white head feathers, but it’s worth it. What’s a bit of blood when you can fill your boots like this?” 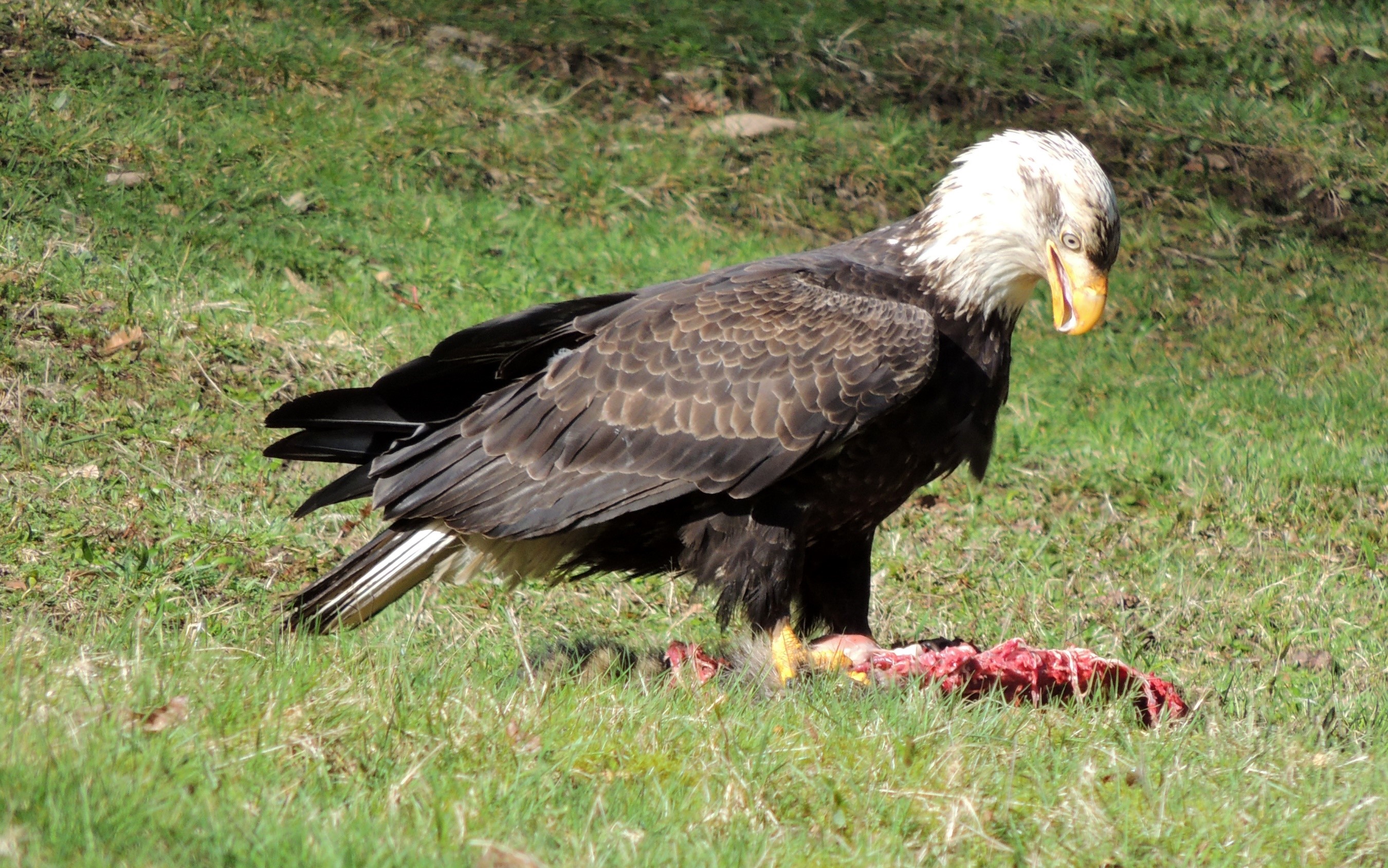 “Just a few tidbits left. I hope I can still fly up into that tree with my stomach so full.” 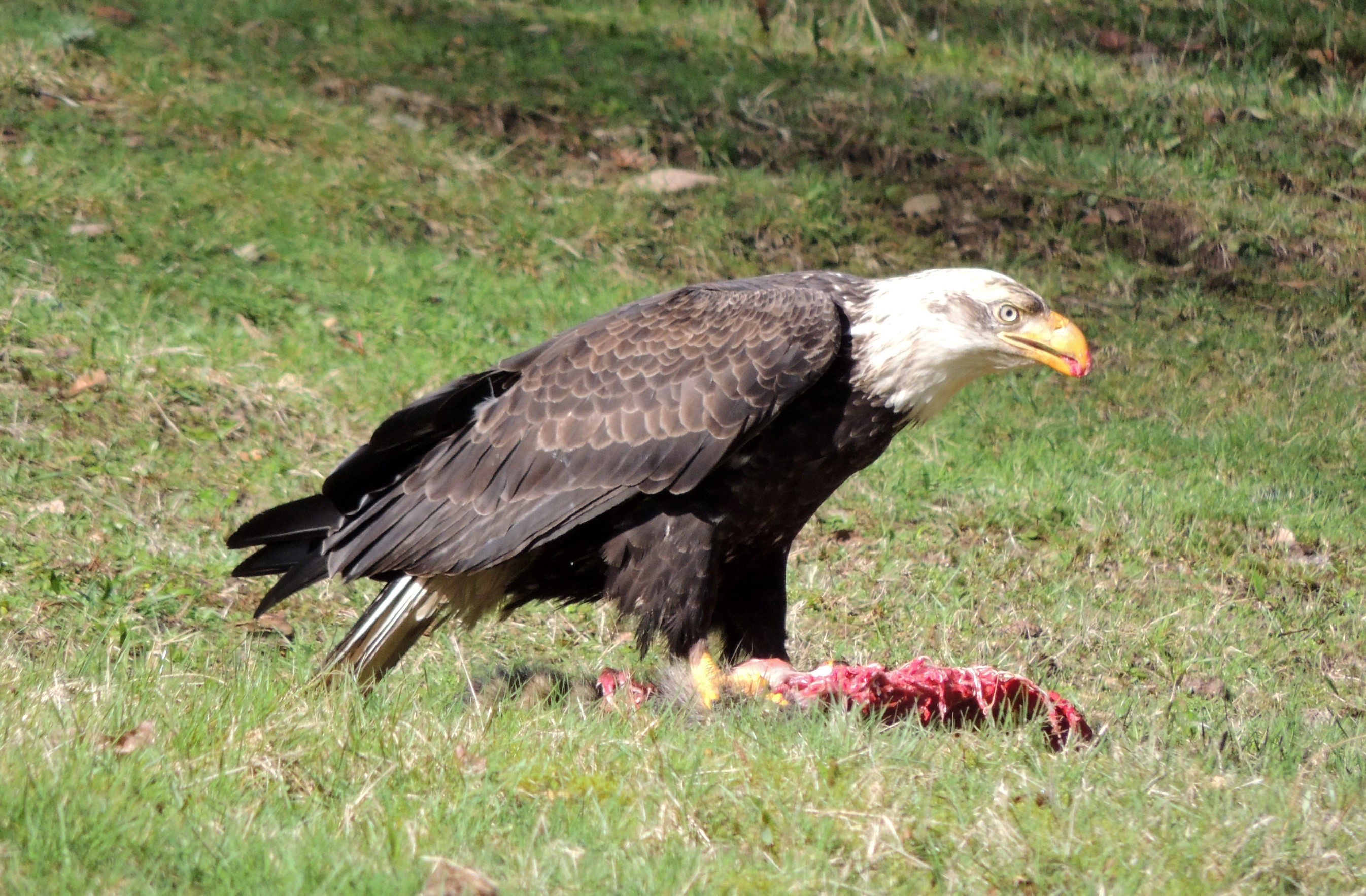 Once when I was playing with Ruby, our late springer spaniel (then a small puppy), in the backyard, two eagles had been sitting unnoticed by me, in a nearby fir tree. They swooped down low across the yard, heading for tiny Ruby. I ran for Ruby and spread out my arms to provide an “umbrella” over her, and the eagles lifted up like two jets making an aborted landing. If I hadn’t been out there with her, she would have been eagle food that day. 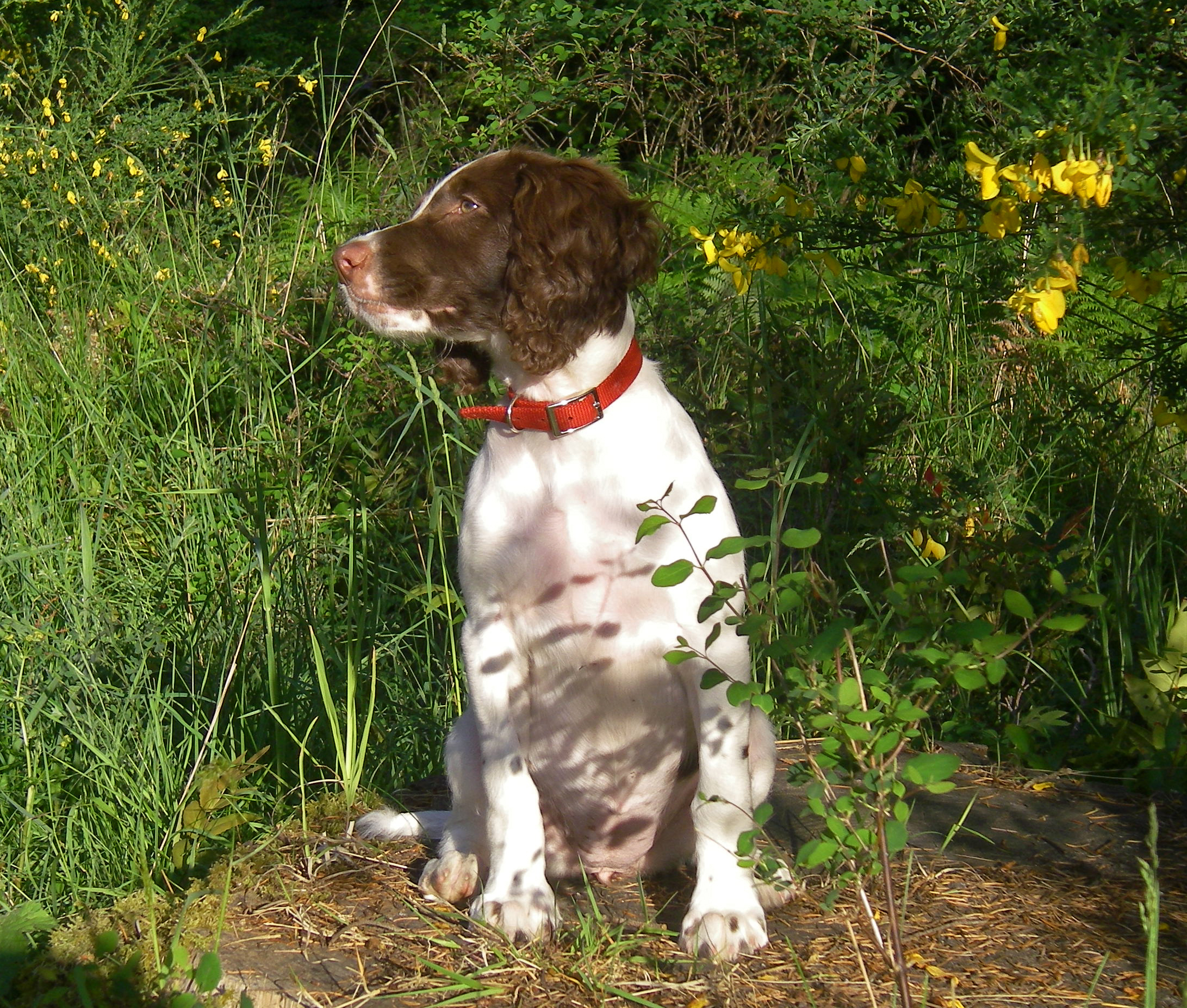 So take care if you live in eagle country and have small dogs or cats.