Vernon Lake on northern Vancouver Island is a good-sized piece of water. Expect lots of gray days, with misty clouds, some moving around the lake, some hanging onto the hilltops nearby.

If you are in a small boat, watch for the many partially submerged logs, especially near the shores. The area around the lake was logged long ago, probably more than once, by the look of the different sizes of trees.

Some of the trees have been in the water for so long that the exposed stumps have decayed and supported new plant growth. Sorry for the blurry photo of that one. It was a quick afterthought photo on a drive-by in the skiff. 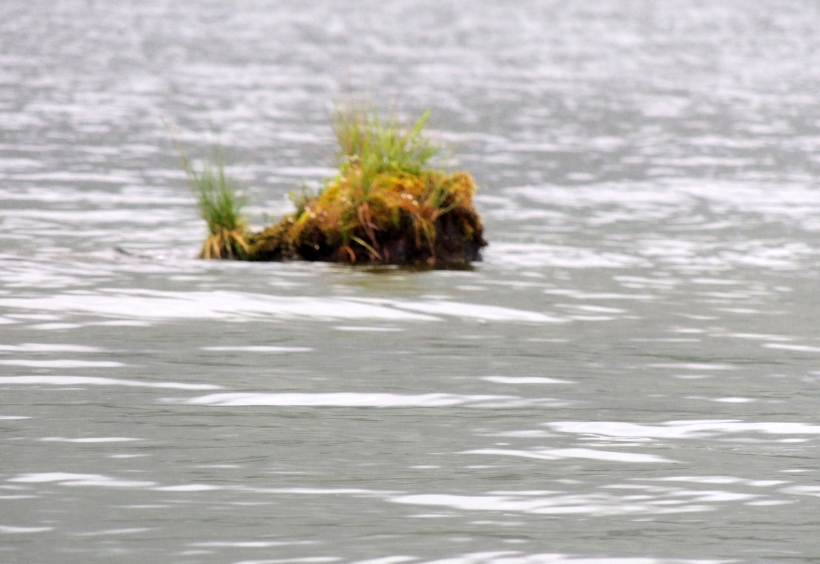 Some stumps had not had time to develop growth yet. Instead they took on the role of sea monsters guarding the passageway to the far end of the lake.

At that end where the river flows out, the lake narrows like a funnel. Along the sides of the ever narrowing passageway, stand snags of trees that were probably drowned years ago by the rise in the lake’s water level in the rainy season. It looked to me like Snag Alley.

The water was so clear you wondered if it was really there, except that it reflected the greenery from the shore.

The Captain did his best to catch a fish after scrambling to get all his ducks in a row.

Either our timing wasn’t right, or the Captain was hampered by having to set up the Admiral with her fishing rod, but by the time he was able to dabble, it was not a fishy time for him just then and there.

Or possibly the fish didn’t take him seriously because he wasn’t wearing all his top-of-the-line brand name fishing paraphernalia. (The Admiral didn’t care about that stuff as long as he had the bear spray along.)

Anyway, supper that day was not going to be fresh gourmet fish.

It was time for one of my favourite sayings: Tomorrow is another day.

36 thoughts on “Fish or Beans”